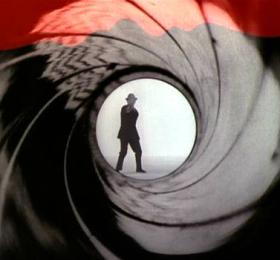 The Gun Barrel Sequence is the scene that typically opens any James Bond film, game, or other video media. It features James Bond walking along a white backdrop, shown through the view of the barrel of a henchman's gun. Realizing he is about to be killed, Bond quickly whips around and shoots the assassin first. The scene has been shot with many different actors including Bob Simmons, Sean Connery, George Lazenby, Roger Moore, Timothy Dalton, Pierce Brosnan and Daniel Craig. 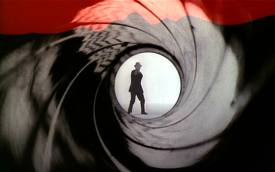 In 1962, the astonishing United Artists studio logo music blasted out to movie audiences around the globe. It was followed by what would come to be the most famous movie introduction ever. James Bond, played by Bob Simmons, walked along a white backdrop, shown from a view through the inside of the barrel of a henchman's gun. Aware that he was being watched, Bond quickly turned and shot the assassin. Blood dripped down the screen, the gun barrel trailing off and opening to reveal the main titles.

Since then, the tradition has continued, with a current total of 7 actors having played Bond in the sequence. The sequence has remained relatively the same, with some small differences along the years. However, the entire scene was given a redesign for Casino Royale in 2006.

Dr No: The start

The gun barrel sequence was created by Maurice Binder, who went on to design 14 of the James Bond title sequences. The effect was as realistic as it seems, as Maurice created it by filming through a real gun barrel with a pin-hole camera. A fact unknown to many is that Sean Connery was not actually playing James Bond in the scene. It was in fact stuntman Bob Simmons, wearing a suit and hat, his right arm out-stretched with a pistol and his left arm concealed at his side. The scene with Bob Simmons was used 3 times, in Dr. No, From Russia with Love and Goldfinger. 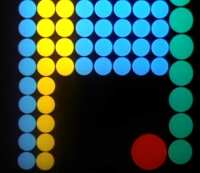 As the blood dripped away, the gun barrel swayed from side to side, went to the right of the screen and turned white, fading into a dotty title sequence, as shown on the left.

Since the gun barrel sequence is the first sequence in the film, Bob Simmons could arguably be the first official James Bond. Although two actors had previously played him (see Who Played James Bond: A Complete History), Bob Simmons was the first person to portray James Bond in the official Eon Productions Series.

The gun barrel sequence in Dr. No is also noted for its unique opening sound effects, different from all those to follow, as well as being the scene to originally showcase the world renowned James Bond theme tune! Although Monty Norman is credited for writing the tune, some people believe that John Barry was responsible for at least part of it. Its just one man's word against another's, but regardless of who composed it, the theme tune is an absolute classic that is recognizable worldwide and superbly suited for the introduction to James Bond. It even made our list of Top 10 Bond Theme Songs.

During pre-production of Thunderball, the decision was made to use CinemaScope Anamorphic film, which allowed for a 16:9 aspect ratio to be filmed on a 4:3 piece of film. The change in aspect ratio meant that the original gun barrel sequence needed to be reshot, otherwise it would appear horizontally stretched in the theatres.

They choose to reshoot the scene with Sean Connery playing Bond. It is unclear why this decision was made, because Bob Simmons was still the Stunt Arranger on Thunderball, and was therefore available for shooting. Perhaps Connery was meant to be in the original, but was unavailable, forcing them to substitute.

It is clear that Sean Connery was trying to imitate Bob in the reshoot, but the shots aren't quite identical. Connery wears the same clothes, but when he turns to shoot the assassin, his extends out his left arm, instead of hiding it at his side. His stance is also a little different. Note the visible difference in aspect ratio between the two images above.

This version of the sequence was actually shot in colour, as opposed to the original black and white version. However, it was rendered in black and white when it was used again in You Only Live Twice, and later, Diamonds Are Forever.

On Her Majesty's Secret Service: Lazenby

When Connery quit the role of James Bond after You Only Live Twice, the scene had to be reshot again for new actor George Lazenby. The producers didn't want Lazenby to just imitate Connery throughout On Her Majesty's Secret Service, so they changed a few things up, including the gun barrel sequence.

For the first time since Dr. No, the white dot stops halfway to reveal the "Harry Saltzman and Albert R. Broccoli present" credit line. Then Lazenby walks across the screen and turns, falling onto his knees, before shooting the assassin. It was also the only sequence where the blood erased the image of Bond as it came down, instead of the usual translucent effect.

Another interesting aspect of this sequence is that it reveals that Lazenby was in fact walking on a treadmill. The gun barrel stops at the center of the screen, but Bond keeps moving for half a second, before turning to shoot.

OHMSS was the only film where the blood erased Bond from the screen.

With Live and Let Die, the filming returned to the original 1.85:1 aspect ratio of the early films, and the sequence was reshot with Roger Moore. For his entry, Roger walked across the screen and turned, his legs apart and his left hand on his right arm, steadying his shot. It was the first time James Bond hadn't worn a hat in the sequence.

This scene was used again in The Man with the Golden Gun. However, starting with The Spy Who Loved Me, the series changed back to the anamorphic film format, and Roger had to shoot the scene again. They were careful to make the reshoot as close to the original as possible, but they did change Rogers casual suit to a tuxedo, another first for the series.

It went on to be used in The Spy Who Loved Me, Moonraker, For Your Eyes Only, Octopussy and A View to a Kill, at which point Roger Moore retired from the role of James Bond, painting the way for Timothy Dalton.

When Timothy Dalton came aboard for The Living Daylights, he actually filmed the sequence twice. The first one was scrapped, because it was thought that Tim jumped too far when he spun around to shoot. It wasn't lost though, as it was used in an early British teaser trailer.

The second sequence is the one used in The Living Daylights and Licence to Kill. Tim shoots in a similar fashion to Bob Simmons and Sean Connery, with his right arm extended out to shoot, and his left arm by his side. He leans to the right a little though, and his stance is unique too.

Goldeneye: Brosnan and the Age of CGI

Goldeneye marked the first large deviation from the traditional gun barrel sequence. Maurice Binder, who had done all of the sequences up to this point, passed away in 1991, and was replaced by Daniel Kleinman. Daniel changed the long standing tradition of using a real gun, instead choosing to use CGI to generate the scene.

To his credit though, he kept the style extremely similar to Maurice Binder's work, a respectable choice in my opinion. The change to CGI produced a sharper, sleeker image, that suited the newer films. Daniel darkened the colour of the blood, but kept everything else the same.

Like Timothy Dalton, Pierce Brosnan also filmed two versions of the sequence, one being used for the trailer, another reshot for the actual film. The teaser trailer for Tomorrow Never Dies shows the alternate version. In both versions, Pierce shoots with his right arm, but unlike all Tim, Sean and Bob, he remains bolt upright as he turns.

In 2001, while Die Another Day was in production, Director Lee Tamahori requested that a special addition be made, to celebrate the 20th film in the series. The gun barrel sequence was modified to include a CGI bullet shooting into the screen, as shown in the image on the left.

As part of the reboot of the series with Casino Royale, the producers decided to change a few things, including the 20 movie tradition of the gun barrel sequence. It's always a little controversial to do something like this, but with Casino Royale, I think it was the right choice.

To explain why, I'll first have to set the scene. Casino Royale was the first James Bond novel, and the producers decided to make the film a sort of prequel to the rest of the series. It began with a very stylish black and white scene where Bond kills the two people required for him to get his 00-status.

He kills the first man in a bathroom, and then heads to the office of a corrupt MI6 agent to get his second kill. It then skips back to the bathroom scene, where Bond bends down to pick up his gun. As he's doing this, the man he just killed turns out to be still alive, and points his own gun at Bond. Bond turns around and shoots just in time, shown from the view through the assassins gun, and it then goes into the titles.

The sequence was the first to be shown in Black and White since Diamond's Are Forever back in 1971. There are many differences in the gun barrel itself. For a start, they scrapped Maurice Binder's design, instead making a barrel with 28 grooves instead of 8. It was also a different style and colour, and the first ever sequence not shot against a white background.

It was also the first time that some variation of the James Bond Theme hadn't been used. Instead, it went straight into the title song. They changed the tradition, but given the circumstances, I think it was an excellent choice, and extremely well done.

Quantum Of Solace: The End of a Tradition

Now this is the one I really don't understand. For Quantum Of Solace they brought back a sequence closer to the originals than Casino Royale had been. The white dots moving across the screen had returned, the gun barrel was almost back to normal, the scene was again filmed against a white backdrop, and the James Bond Theme Song was back.

Sounds great right? Well no, because for some unknown reason, they choose to ruin a long running tradition by placing the sequence at the end of the film, right before the credits. I believe it was a terrible decision, because a Bond movie should, by definition, open with the gun barrel sequence. Sure, Casino Royale had a little scene first, but the main film itself did open with a gun barrel.

Complaints aside, let's discuss the scene in question. It was created by the design company MK12, who replaced Daniel Kleinman as the Title Sequence Designer. Daniel Craig walks in quite a hurry across a white backdrop and turns to shoot, standing in a similar fashion to Timothy Dalton. The camera then zooms out, and the red silhouette of Bond makes the Q in the Quantum of Solace logo.