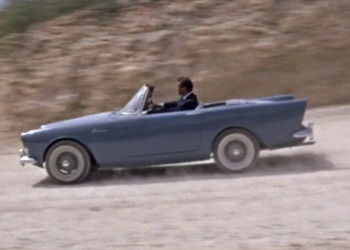 James Bond's first car was the modest Sunbeam Alpine Series II, in lake blue. After being invited to the mountain apartment of enemy spy Miss Taro, Bond drove the Sunbeam up the dusty road and into a trap. He was soon chased by a large hearse that tried to ram him off the edge of the sharp cliff. After some tense corners, a crane blocked the road ahead. Bond managed to pass underneath, but the hearse was too tall and skidded off the mountain to a fiery death.

Like many Bond cars to follow, the Sunbeam was English made, manufactured just outside of Coventry in the West Midlands. The iconic car had also featured in the novel Dr. No, where it was the personal car of John Strangways, head of Station J, Jamaica. For the film, it was rumoured that the producers had borrowed the Sunbeam from a local resident to avoid the cost of importing their own. 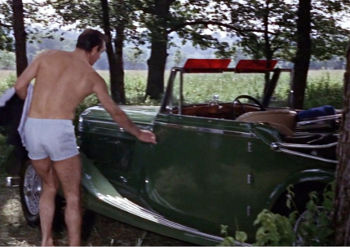 Bond's car in From Russia with Love is an unusual one for the series, as the Bentley Mark IV was almost 30 years old at the time of the film's release. In several of the Ian Fleming novels, Bond had driven a Bentley 4.5 litre, which predated the Mark IV by two years. This was likely the inspiration behind its inclusion in the film.

Early on in From Russia with Love, Bond is shown picnicking alongside a river with Sylvia Trench. They are about to enjoy some Taittinger champagne when Bond is paged by HQ. He goes to the Bentley and calls Miss Moneypenny from the car phone. Before heading back to MI6, he brings up the convertible roof for some private time with Miss Trench. 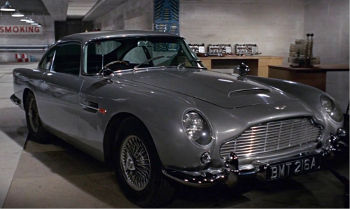 The Aston Martin DB5 is the quintessential James Bond car, and one of the most recognizable and famous cars in cinema history. In the novel, Bond had driven a DB Mark III, but the producers chose to use the newer DB5, which had been released only 3 months prior to shooting. The special effects team added a large array of gadgets to the car, including an ejector seat, machine guns, a smoke screen, and tyre slashers.

The tie-in Corgi model of the DB5 became the best selling toy of the year, and the producers brought the car back for the next film, Thunderball. Since then a DB5 has also featured in Goldeneye, Tomorrow Never Dies, Casino Royale and Skyfall. 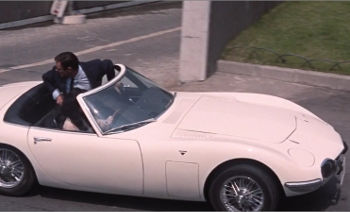 Known as Japan's first supercar, the Toyota 2000 GT was the obvious car of choice for You Only Live Twice, a Bond film set primarily in Japan. Only 351 models were produced, making the car rarer than a DB5. The 2000 GT was actually a hardtop coupé, but the low roof proved too restrictive for Sean Connery, who was too tall to sit comfortably in the car. At short notice, Toyota made modifications to produce a special open top version just for the film. 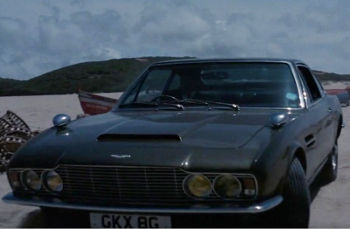 On Her Majesty's Secret Service introduced a new James Bond, George Lazenby, and it was only right to equip him with the latest Aston Martin. The Aston played a key part in the film's shocking ending, as well as in introducing the new lead actor. Bond is first shown driving along a winding Portugal road in the beautiful Aston Martin DBS, his face hidden in silhouette in an artistic introduction. At the film's end, Bond's wife is assassinated through the DBS's windshield.

The Aston Martin DBS was the last car the company produced under the ownership of David Brown, after whom the DB series had been named. In the following Bond film, Diamonds Are Forever, the DBS was briefly shown being fitted with missiles in Q's lab. 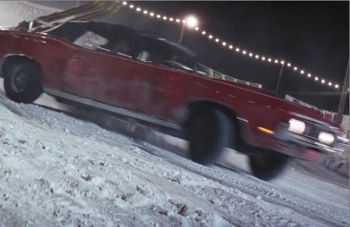 When Bond is on the run in Piz Gloria without his Aston, he has to rely on his future wife Tracy Di Vicenzo, and her red Mercury Cougar. With the help of rally studs for added traction on the icy roads, Tracy proves to be a competent driver, out-cornering the henchmen trying to shoot them down. In order to lose the tail, Tracy enters a stock car race track, and after a few laps manages to escape, leaving the henchmen upturned in an explosive crash. 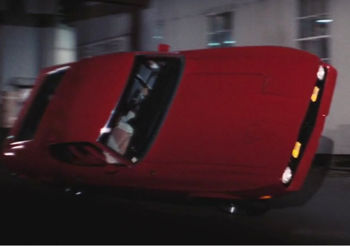 While Diamonds Are Forever wasn't the most well received Sean Connery Bond film, it did have one of the best car chases of the early series. While at the wheel of Tiffany Case's Ford Mustang, Bond finds himself on the Sheriff's radar, resulting in a high tension chase along the Las Vegas strip. There are some excellently choreographed manoeuvres, but the action soon moves to a parking lot, where Bond tricks half a dozen police cars into crashing into each other, before escaping over a ramp. Before long, the only undamaged police car left in the vicinity takes chase, and Bond takes a wrong turn down a dead end alley. He tells Tiffany Case to lean over and uses a loading ramp to put the car on two wheels and escape through the narrow pedestrian walkway to safety.

Interestingly, the Vegas strip was so busy that for most of the chase scene, large crowds of tourists could be seen on the sidewalks, watching the action. The producers hoped that the chase would be so exciting that the audience wouldn't notice. Another point of interest is that virtually all the cars destroyed during filming were Fords. That's because Ford offered to supply as many cars as the producers wanted, if Bond drove a Mustang. 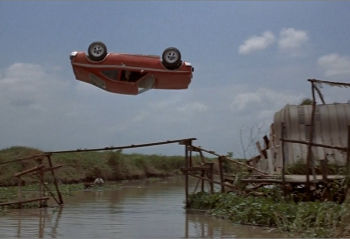 In The Man with the Golden Gun, Mary Goodnight gets herself kidnapped by Francisco Scaramanga. Bond runs to his car to make chase, only to realize that Ms. Goodnight has the keys. With Scaramanga almost out of sight, Bond spots a car dealership, and steals an AMC Hornet, driving it right out through the showroom window. Live and Let Die's Sheriff J.W. Pepper returns as a Bangkok tourist, who just so happened to be sitting in the passenger seat of the Hornet.

The pair chase Scaramanga, with Pepper adding some comic relief to the tense action scene. Bond swerves in and out of the busy Bangkok traffic to make up for the lost distance. With some creative driving, Scaramanga manages to double back on Bond and heads in the opposite direction. Bond immediately executes an impressive backwards-forward manoeuvre to absolute perfection, but soon finds himself on the opposite side of a river to Scaramanga, and miles away from a bridge. In the film's landmark stunt, Bond spots an old collapsed bridge and does a 360 degree barrel roll over the river.