James Bond Movie - The Spy Who Loved Me 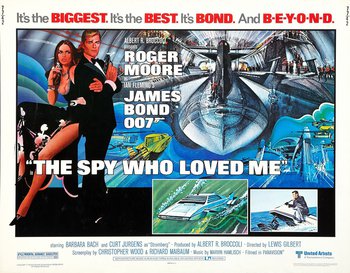 James Bond is enjoying some company in a log cabin in Austria, when he is called away to a mission. Skiing his way down the mountain, Bond is chased by Soviet agents, and has to jump over the edge of the cliff to escape, after killing of one the Russians. His parachute opens to reveal a union jack, just as the theme song Nobody Does It Better begins playing.

When Bond goes to find him, he discovers him dead, and follows his killer, henchman Jaws. Bond sneaks into the back of Jaws' van, and is joined by Triple X just before they're driven off. Jaws drives into an Egyptian temple, and tries to kill the two spies, having being aware of their passage in his van.

His attempts are unsuccessful, and Bond and Amasova manage to steal the van and drive away to safety. There is tension between the two spies, but M, and Amasova's boss General Gogol force the two to co-operate, to ease relations between their two countries.

They track the submarine thefts back to Karl Stromberg, a rich owner of a large shipping firm. During their pursuit, Amasova is again attacked by Jaws, but Bond saves her life, easing tensions between the pair. Jaws doesn't give in, and the two endure enemy fire from a helicopter chase. They escape in Bond's Lotus Espirit, that has been modified by Q Branch to double as a mini submarine.

The two escape to safety, but Amasova learns that the Soviet agent that Bond killed in Austria was in fact her boyfriend. She swears to kill Bond after the mission is over, to avenge the death, despite Bond's explanation of the circumstances.

Bond joins an American submarine crew to survey Stromberg's Atlantis hideout, but the submarine is hijacked by Stromberg's huge hollowed out tanker. The crew is imprisoned and Stromberg reveals his plans to destroy New York city and Moscow with nuclear weapons, starting a war between the two nations.

Bond manages to escape, and frees the American crews, as well as the British and Russian crews that had been captured at the start of the film. Breaking into Stromberg's weapon stores, the crews take rifles and grenades and kill the majority of Stromberg's guards. The remaining villains hide in the tanker's control room, sealed behind thick armoured walls.

Undeterred, Bond takes the detonation device out of a nuclear warhead, and blows a hole in the control room, taking full control of the tanker. Bond then rescues Amasova and stops the nuclear bombs on route, reprogramming their paths. Bond kills Stromberg, leaves Jaws swimming with the sharks, and escapes in Stromberg's luxury escape pod. The mission complete, Amasova pulls out a gun, aims it at Bond and shoots... past him at the bottle of Champagne, forgiving him for her boyfriend's death. 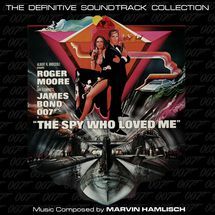 
« Prev: The Man with the Golden Gun