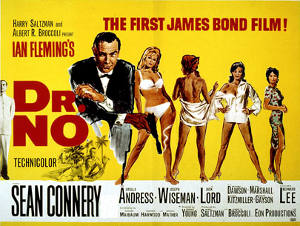 When the Station Chief of Jamaica John Strangways misses the daily report to London headquarters, and is reported missing along with his secretary, James Bond is sent to investigate.

Bond arrives in Jamaica and is greeted by a driver claiming to be from Government House, even though such an arrangement was never made. He goes along with it anyway and is soon chased by two men. After loosing them, Bond interrogates the driver, who commits suicide with a cyanide filled cigarette before giving out any information.

Bond proceeds to Government House and visits Strangways home, finding a geology receipt from a Professor Dent. An officer from Government House tells Bond that Strangways had taken a boat out to collect rock samples with a local fisherman named Quarrel. Bond finds Quarrel and realizes that he was one of the men following him from the airport.

After a brief brawl with Quarrel, another man shows up and holds Bond up at gunpoint, later revealing himself to be Felix Leiter of the CIA. They go to Quarrel's boat with a Geiger counter and Bond discovers that the place in the boat where Strangways put the rocks has a high reading--the rocks were radioactive.

Bond goes to visit Professor Dent, who tells him that Strangways brought back some iron ore rocks, thinking they were valuable. Fearing that he knows too much, Dent tries to lure Bond into a trap. However, knowing the truth about the rock samples, Bond is ready waiting, and kills the Professor.

Bond then visits Crab Key Island, where the rocks had come from, after hearing that the island is heavily guarded by a strange Chinese man. They meet a girl named Honey Ryder, who is collecting shells on the beach. The guard patrols see Honey's boat and chase after them. They are eventually caught up by a vehicle dressed up to look like a dragon, and are captured after Quarrel is killed.

Bond meets the owner of the island, Dr. No, and discovers that he works for SPECTRE, the SPecial Executive for Counter-intelligence, Terrorism, Revenge and Extortion. They have dinner and Dr. No reveals his plan to demonstrate SPECTRE's power by using an nuclear powered radio beam to disrupt rockets in NASA's Project Mercury, the first human spaceflight program in America.

After refusing an offer to join the organization, Bond is imprisoned in a small cell. He manages to escape through the vent system and ambushes a technician, taking his clothes and sneaking into the control room. He then overpowers the reactor, causing an impending meltdown, and the island is evacuated. Dr. No goes after Bond and is thrown to his death in the heart of the reactor. Bond then finds Honey Ryder and escapes in a boat just as the island explodes.

Production - The Start of an Era

In late 1960, Producer Harry Saltzman approached James Bond author Ian Fleming, wanting to discuss the sale of the film rights for the novels. Fleming, having written Bond novels for 7 years at that point, had probably seen his fair share of illegitimate offers for the rights in the past. So to be sure Saltzman was serious, he suggested a price quite absurdly high for the time, $50,000 for a 6 month hold, and $100,000 per film on their release. To his surprise, Saltzman accepted.

Meanwhile, Producer Cubby Broccoli had broken up with his film partner Irving Allen, and was looking for a new project. He heard from a friend that Harry Saltzman had the rights, and was having trouble getting the money together, with his 6 month hold on the novels about to run out. Cubby went to see him, attempting to buy the rights, but Harry didn't want to give them up, so they instead formed a partnership, and the legend began.

Cubby and Harry went to American and pitched the movie to the heads of United Artists, who, as it turned out, had been looking to acquire the rights to James Bond earlier that year. The deal was made, and the production began, on a budget of $1,000,000. UA originally planned to make Thunderball the first movie, as the novel had just been released several months earlier. A screenplay was even written, but problems arose and the project was cancelled.

Several years earlier, Ian Fleming had begun a project to make a screenplay with several other authors, which Kevin McClory was to direct. The project fell through, and was completely scrapped, but Ian Fleming used some elements of the screenplay in his novel Thunderball. Around the time Harry Saltzman and Cubby Broccoli had teamed up, Kevin had become aware of their intention to make Thunderball and sued Ian Fleming, claiming rights on elements of the novel. There is a large debate over the authorship, but to be brief, Kevin won the case.

So Thunderball was scrapped, and the producers decided to instead move onto an adaption of Dr. No. They brought in writer Richard Maibaum, who had been working on the scrapped Thunderball screenplay. Cubby also pulled in director Terence Young, who he'd worked with before on some of his earliest productions. They were almost set, but still without a lead actor.

Several famous actors had been considered for the role of James Bond, but Harry and Cubby had always had a preference for an unknown actor to play the part. A competition was set up to "Find James Bond", and a few of the finalists auditioned in front of Harry, Cubby and Ian Fleming. The best candidate was announced to be professional model Peter Anthony, but Cubby decided he couldn't handle the part.

The producers finally settled on Sean Connery, who not only had the style and charisma required for Bond, but also had a certain roughness about him which would even out Bond's Snobbery into a more balanced character. Connery was initially offered a 3 year contract for 6 films, but having recently gotten out of a bad contract with Fox, demanded the freedom to play other roles. The producers accepted, the agreement was changed to 1 film per year, and Sean Connery became James Bond.

While searching for the perfect actress to play Honey Rider, producer Cubby Broccoli discovered a photo of Ursula Andress among a pile of hundreds of publicity shots lying on his desk. As Cubby recollected in his autobiography, he picked up the photo and said to fellow producer Harry Saltzman, "Well, this is the girl, Harry", casting her in the role almost immediately.

Ursula accepted the role on the advise of her husband, two weeks before the beginning of shooting. Funnily enough, the publicity shot Cubby had seen on his desk had been of Ursula walking out of the water, in a similar fashion to how she would later appear in the film. 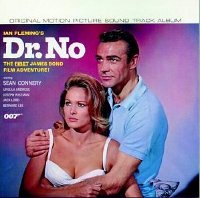 The Dr. No soundtrack was released to coincide with the American release of Dr. No on May 8th, 1963. Besides those recorded by the John Barry Orchestra, most of the songs on the album were performed by Byron Lee and the Dragonaires, who appeared in the film singing Jump Up.

There is still much debate and controversy over who composed the James Bond Theme. Monty Norman was originally hired to write the film's soundtrack, and was credited for it in the film. However, midway through the production, the producers hired composer John Barry to rearrange the main theme, and write the rest of the music for the film.

The change in composer introduced inconsistencies between the film and the soundtrack. The music in film was almost entirely John Barry's, while the soundtrack is mostly Monty Normans work, most of which was unused in the film. Because of this, the album received sub-par reviews from the media and Bond fans alike. Also note that Diana Coupland was Norman's wife at the time.


Next: From Russia With Love »