James Bond Movie - The Man with the Golden Gun 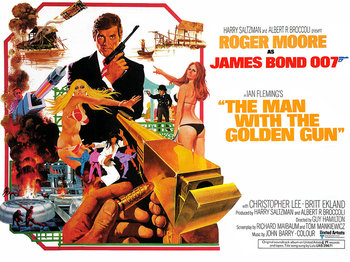 The Man with the Golden Gun opens with a game of death. A gangster named Rodney is invited to Francisco Scaramanga's private island, with a challenge to kill him. Rodney gets a fully loaded gun, while Scaramanga gets only one golden bullet. But, Rodney is lead into a fun house, and Scaramanga has the advantage, killing Rodney and winning another of his games.

Back in London, Bond is confronted by M, who tells him that MI6 has been sent a golden bullet with 007 engraved onto it. Believing Bond is the next target, M sends him to find Scaramanga first. During his search, Bond meets a belly dancer with a golden bullet as her lucky belly button charm. After trying to discreetly take the bullet, a thug gets in the way, and Bond ends up swallowing it.

Although initially very strong, Bond manages to get information out of Anders. He learns that Scaramanga will be at the Bottoms Up club in Hong Kong, and heads over to surprise him. However, always two steps ahead, Scaramanga has his sights on Bond. He shoots past him to kill energy scientist Gibson, allowing his man-servant/sidekick Nick Nack to collect the valuable energy Solex agitator.

Bond is arrested for the assassination by Lieutenant Hip. However, it turns out that Hip is helping Bond out of the situation, by taking him to a wrecked ship that has been converted into a HQ for MI6. Bond meets M and Q, who brief him to retrieve the Solex agitator from Scaramanga. Bond suspects that millionaire Hai Fat financed the assassination, and poses as Scaramanga to get into his palace, complete with a fake third nipple, courtesy of Q.

Hai Fat, who had already met with Scaramanga in person, knew Bond's identity, and captured him. Fat intended for Bond to fight to death with his martial art experts, but Bond fights cheaply and manages to escape. Fat is then killed by Scaramanga, for being incompetent at dealing with the problem.

Bond is then surprised by Ms. Anders, who makes a midnight visit. She pleas with him to kill Scaramanga, revealing that it was her that sent the engraved bullet to MI6. Bond goes to a Sumo Wrestling event the next day, to collect the Solex agitator, that Anders has stolen from Scaramanga's safe.

Bond arrives to find her dead, and loses both the agitator and his clumsy assistant Mary Goodnight. Following her to Scaramanga's island, Bond receives a warm welcome and a tour, before Scaramanga challenges Bond to an old fashioned duel.

Following his usual tricks, Scaramanga disappears into his fun house before Bond turns around to shoot. Although Scaramanga has the advantage, knowing the tricks and layout of his fun house, Bond manages to out smart him. Scaramanga happens to have a life-size mannequin of Bond, for target practise, and Bond stands in its place, providing him the surprise needed to kill Scaramanga. He and Mary Goodnight take the agitator and escape the island just before it explodes. 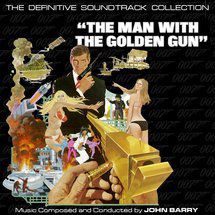 Next: The Spy Who Loved Me »