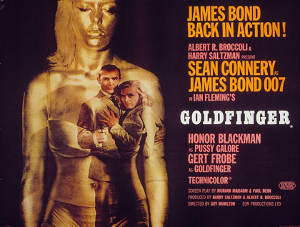 Goldfinger opens with a pre-title sequence where James Bond foils a Mexican drug operation, by blowing up the base with plastic explosives. After the titles, the film opens in Miami Beach, USA, where Felix Leiter delivers a message to Bond from M, telling him to watch Auric Goldfinger.

Bond discovers that Goldfinger is cheating at cards, by having a woman use binoculars to spy on the other man, reporting his cards to Goldfinger via his ear piece. Bond seduces the girl and makes Goldfinger loose $10,000 by threatening to call the Miami Beach Police. Goldfinger gets his revenge, sending his henchman Oddjob to kill the girl by suffocating her with gold paint, in the most iconic scene of the series.

Bond goes to London and has dinner with Colonel Smithers of the Bank of England, where he learns his true mission is to find out how Goldfinger is smuggling gold out of the country. He meets with Goldfinger at a golf club, where the two play a match, with a bar of gold wagering on the side.

Despite Goldfinger's cheating, Bond manages to outsmart him and win the game. Goldfinger warns Bond to stop messing with his affairs, getting Oddjob to knock the head off of a statue with his bowling hat, as a threat. Despite the threat, Bond follows him to Switzerland and camps out until dark.

After overhearing Goldfinger talk about Operation Grand Slam, Bond encounters Tilly Masterson, who is trying to get revenge for the death of her sister. The two accidentally activate a trip wire, and are chased in the DB5 by security. They hit a dead end and while trying to escape, Tilly is killed and Bond is captured.

Bond awakes tied to a table, and is almost castrated by an industrial laser, but is kept alive when he claims to know about Operation Grand Slam. He's then flown to Kentucky where he meets the pilot, Pussy Galore. He escapes and overhears Goldfinger detailing the operation.

Goldfinger's plan is to knock out the troops surrounding Fort Knox with invisible nerve gas, and then break in, setting a nuclear bomb off in the vaults. This would cause the gold to be radioactive and worthless for 58 years, increasing the value of his own gold.

Pussy Galore is told to lead a group of planes over Fort Knox to spray the gas. She is seduced by Bond however, and calls the CIA, who replace the nerve has with harmless air. The plan goes into action, and the guards around Fort Knox pretend to be knocked unconscious, while Goldfinger breaks into the vault.

The bomb is locked in the vault with Oddjob and Bond, and Goldfinger prepares to escape. He is ambushed by the guards however, but manages to escape anyway, as he had worn a colonel's uniform under his jacket, in case anything went wrong.

Inside the vaults, Bond fights Oddjob and kills him via electrocution, and then breaks open the casing of the bomb. He isn't sure how to disarm it, but at the last minute, the CIA breaks in and a bomb specialist manages to disarm it, with only 007 seconds left on the clock.

The matter is cleared up and Bond is flown to Washington to have dinner with the President. Unbeknown to Felix and his friends, Goldfinger had already hijacked the plane, and Bond is left at his mercy. A fight ensues and a window of the plane is broken.

The cabin depressurizes and Goldfinger is sucked out of the window to his death. Bond goes to the cockpit and discovers Pussy Galore is piloting the plane. The two try to get the plane out of a nose dive, but fail, instead choosing to parachute to safety, alone at last.

When the Producers choose Honor Blackman to play Ms. Galore, they faced a large challenge. They wanted to use the name Pussy Galore, but with the uptight times of the 60's, they knew it would never get past the censors. Publicist Tom Carlile solved the problem. He send Blackman to the premier of Move Over Darling, which he knew Prince Phillip would be attending.

He made sure Blackman would be introduced to the Prince, and hired a photographer to get some good photos of the two. The press did the rest of the work for him. With a little persuasion, he got the photos printed on the front page of The Daily Mail, with the title 'Pussy and the Prince'.

There was no public outrage over the title, and so the producers had proof of public acceptance of the name. On top of that, they were using an original Ian Fleming character name. The censors let it go through, and the rest is history. Without the help of Tom Carlile, she may have been called Kitty Galore.

Although trailing second behind Thunderball in inflation adjusted revenue, Goldfinger is by far a clear first in terms of its legacy. To understand why it was the most exciting release in the history of motion pictures, you have to realize that Goldfinger was a legend before it was even released.

On the night of the world premier at the London Odeon on 17th September 1964, the film was enclosed in a gold tin and delivered by models wearing gold suits. The crowds of thousands, who had gathered in the early hours of the day, went wild. And then Honor Blackman arrived. She wore a 22 carat gold finger on her little finger, that cost the equivalent of $100,000.

The excitement in the crowds was astonishing, and fights and riots broke out. There was so many people in such a small space that one policeman was actually pushed through the window of the cinema. The crowds got so rowdy that Honor was rushed inside with nearly 100 policemen, to keep the crowds out.

The Producers had decided to gear the film a little more to American viewers, while still maintaining a fully British style. They shot in Miami and Kentucky, and at Fort Knox. And the scale of the advertising was enormous. Everybody, everywhere had seen the famous Golden Girl. There was so much hype and excitement around the world, and the film hadn't even been released.

The hype increased even more after its release. The opening sequence was one of the best of the series, and the whole movie was on such a grand scale. It was larger than life, elegant, entertaining, sexy, and a little funny. It had the gadgets, the girls, the locations, the cars, and a fabulous cast. Goldfinger was the highest point of the Bond series, and will forever remain the best entry in the series, a true legend. 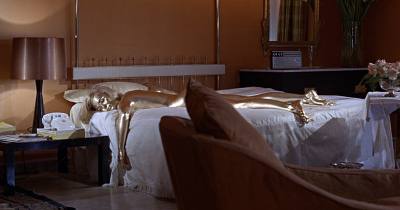 The main theme for Goldfinger was composed by John Barry. Lyrics were then added by British artists Anthony Newley and Leslie Bricusse, who had worked together on projects in the past. What really made the song though, was the choice to bring in legend Shirley Bassey. It was the first time Shirley would sing for the series, later coming back to do Diamonds Are Forever and Moonraker.

Interestingly enough, even though the song is regarded as the definitive theme song, outside of the original James Bond Theme, Producer Harry Saltzman hated it. It was almost scrapped, but Harry's partner Cubby Broccoli persuaded him to keep it, and the legend began. Shirley's dramatic and bold vocals brought the lyrics alive, and was perfectly suited for John Barry's orchestral arrangements.

Anthony Newley had originally sung it, but they agreed among themselves that someone bolder was needed. The soundtrack as a whole went perfectly with the film, as Barry used sound effects to match the context of the scene. For example, when Jill Masterson is discovered dead, and covered in gold paint, a metallic chime is played.

The Goldfinger soundtrack was #1 on the charts before the film was even released. And in 1965, it outsold The Beatles. Shirley Bassey ended up selling over a million copies of the soundtrack, ironically earning her a gold album from the RIAA.

In 1964, Composer John Barry had recently finished his soundtrack for Zulu, and was not far away from starting work on the music for The IPCRESS File, which was also a project of producer Harry Saltzman. Between those two films, Barry was hard at work on the Goldfinger theme, which he would often work on for periods of more than 24 hours, not sleeping until he perfected the section he was doing. And a rare piece of trivia for the fanatics: The first person--besides Barry himself of course--to hear the original Goldfinger theme, was none other than Michael Caine, who was staying with Barry for a few days at the time.


« Prev: From Russia With Love