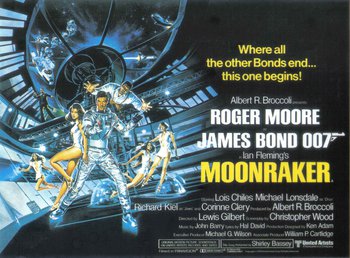 MI6 endures embarrassment as a Moonraker space shuttle on loan to them from Hugo Drax is stolen. Meanwhile, Bond is on a mission in Africa, on board a plane. Henchman Jaws surprises him, and pushes him out of the plane without a parachute. Jaws jumps out after him, and the two have an intense mid-air fight. Bond manages to steal Jaws' parachute and lands safely, leaving Jaws to crash land into a circus tent.

Bond is called back to MI6 and relays the story to Miss Moneypenny, who doesn't believe his flirtatious banter. M briefs him about the shuttle theft, and he's given some poison darts by Q. Bond then makes an official visit to Drax Industries to make an apology, but his real intention is to scope out the place.

Bond meets Hugo Drax and is invited to try a ride in a centrifuge chamber, with the help of Holly Goodhead, one of Drax's astronauts. Bond accepts, but is almost killed as Drax orders the speed of the centrifuge to be brought up to lethal levels. Using his concealed wrist dart gun given to him by Q, Bond manages to short circuit the machine and save his life.

The next morning Bond goes out shooting with Drax, and the two compete to show off their hunting skills. Bond misses some birds, to the delight of Drax, until it is revealed that he actually shot a sniper that Drax had placed to kill Bond. Unwilling to kill Bond in a mundane fashion, Drax lets him go.

Having stolen some plans including the name of a glass manufacturer, Bond tracks them down to Venice, meeting Holly Goodhead while there. While escaping some of Drax's henchmen, Bond stumbles upon a secret laboratory, and accidentally kills some scientists, with an accident involving a vial of invisible poison gas. Bond takes M down to the lab the next day, and to their embarrassment, the lab has been dismantled. All they find is Hugo Drax drinking a cup of tea.

Bond heads to Rio de Janeiro, Brazil to follow another lead, again meeting Holly Goodhead, who he discovers works for the CIA. The two escape yet another death attempt by super-villain Jaws, but five minutes later they are captured again and brought to Drax's shuttle launch facility. Avoiding another interesting death attempt, the two manage to sneak on board one of the Moonraker shuttles and head into space.

It is revealed that Drax's plan is to take a selection of perfect human specimens to a radar jammed space station, and then kill everybody on Earth, to give the human race a fresh start. When Bond and Dr. Goodhead are discovered aboard the space station, Bond convinces Jaws that he and his short girlfriend will be killed, because they're not perfect specimens.

Having convinced Jaws to turn on Drax, the pair escape and manage to take down the radar jamming system, alerting MI6 and US intelligence of the space station's presence. The US sends several shuttles of their own to investigate, which ends up in a high-tech laser space battle. Bond manages to escape with the help of Jaws, and he and Holly steal a space shuttle to destroy the poison gas capsules before they enter Earth's atmosphere. 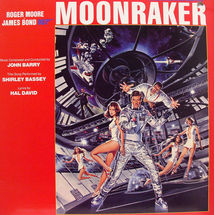 Next: For Your Eyes Only »