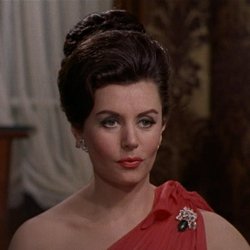 Sylvia Trench was one of James Bond's girlfriends in both Dr. No and From Russia with Love. She was played by Eunice Gayson, and was one of only a few bond girls to be in more than one movie, as well as being the first.

The Character in the Movies

Sylvia Trench, played by Eunice Gayson, first appeared in Dr. No playing Chemin De Fer at a baccarat table with James Bond. She lost a few hands, and suggested that they raise the limits, to which Bond agreed. Then came the famous introductions:

Some have suggested that Sylvia can be credited for giving Bond his iconic phrase, as Bond could have been playfully mimicking Sylvia's introduction when saying "Bond, James Bond" for the first time.

Sylvia ended up loosing again, but impressed with Bond's luck and charisma, she took his card, saying that she might see him again. She certainly did, later breaking into his apartment, where Bond found her playing golf wearing just his shirt. Just as things were heating up, Bond announced that he had to leave immediately... or almost immediately.

Sylvia appeared again in From Russia with Love, picnicking with Bond in a Punt, with a bottle of Taittinger Blanc de Blanc chilling in the river. Bond gets called back to work again by Miss Moneypenny, but decides to take an extra hour with Sylvia. The soft top roof slides back over the car, and the scene ends, marking the last appearance of Sylvia Trench. Sylvia is one of only few Bond girls to have appeared in the series twice.

Sylvia Trench did not appear in the James Bond novels, and was invented by screenplay writer Richard Maibaum. They intended for her to be a regular character in the series, with a recurring joke where Bond has to leave for a case just before things heat up. The idea was scrapped however, during the development of Goldfinger.