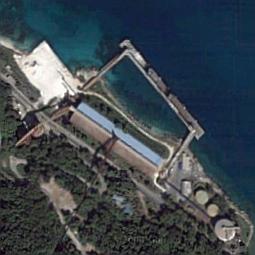 The image on the left is the location used for filming the bauxite mine and other external shots of Crab Key. It is actually in North Jamaica and was cleverly shot to make it look like a small island.

Crab Key in the novel Dr. No

In Ian Fleming's novel Dr. No (1958), Crab Key was an island located thirty miles north of Jamaica and sixty miles south of Cuba. The island was 50 square miles (80km2) and 3/4 of the land toward the east was occupied by swamps, shallow lakes and marshland filled with thousands of trees and shrubs called mangroves.

Toward the west of the island was a 500 foot mountain that abruptly ended at a sheer drop to the infested waters below. A hot wind at the west blew northeast over the mountain. There were many large colonies of seabirds at the west of Crab Key that excreted guano, a substance high in phosphorus that is used to make fertilizer. There was mountains of the stuff and Dr. No hired one hundred workers to dig it out. The workers dug 50 cubic feet of guano a day, which was sold in monthly shipments, loaded onto ships with a crane under the supervision of Dr. No.

A long river led down into the sea, along the south east into a small sandy bay where Bond first went when he visited the island. The bottom of the river was muddy and filled with small fish, shrimp and leeches. The sand in the bay was formed from volcanic rock and was of a chocolate brown colour that looked almost black at night.

To the east of Crab Key there were many species of birds including:

Dr. No had a lair built into the mountain at the west of Crab Key. The inside was huge, with elaborate guest quarters, prison cells and an exquisite dining room and home for Dr. No. In one of the rooms on the west wall, there was a huge pane of magnified glass that gave a magnificent view of the ocean outside. Dr. No had hired experts to build it who had installed the glass panel on the inside of the mountain, and chipped away at the rock outside to create a view directly into the depths of the ocean.

Dr. No was running an operation from the island, jamming USA test missiles with a powerful radio beam, causing them to crash land. The island was well guarded with radar, high powered boat patrols and manhunts with sniffer dogs.

Dr. No had bought the island for its privacy so that he could conduct his plans without interference. However, a group of bird lovers called the Audubon Society had a lease on part of the island and had found some rare birds. They planned to make the island into a tourist attraction and refused to sell their lease. Dr. No bought a huge tractor and fixed it up to look like a dragon, adding a flame thrower on the front. He sent men out in the vehicle to burn the people at the Audubon camp as well as all the rare birds in the area. Although Dr. No got his privacy back, Bond ended up investigating and Dr. No eventually came to his death, choking under a huge heap of guano.

The Real Mine used for Crab Key

Crab Key in the Movie 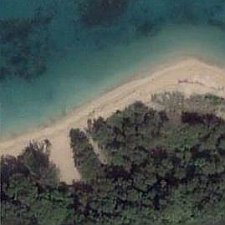 The image on the left is the actual location of the beach used in Dr. No. It is a beach located at the north of Jamaica, but in the film it's the island crab key.

In the movie Dr. No, Crab Key was an island located off the coast of Jamaica. It contained a large bauxite mine and acres upon acres of swamps, marshland, rivers and Mangroves. A Chinese scientist named Dr. No owned the island. He was running an operation where he would ruin USA missile launches by interfering with missiles and causing them to crash. He controlled the missiles with a powerful radio beam which was powered by a nuclear reactor underground.

Dr. No had created an underground lair in the mountains, which contained the reactor, some guest quarters and Dr. No's private quarters. Dr. No had designed a large aquarium with glass that magnified the tiny fish and made them look like sharks.

Bond and his ally Quarrel suspected that Dr. No had murdered a British Agent and had attempted to murder Bond. They sailed over to the island at night and went to sleep. When they awoke the next day, Honey Rider emerged from the sea in a beautiful white bikini in what may be one of the most famous scenes in movie history.

A guard boat zoomed around toward them and told them to come out with their hands up. When nothing happened, they shot around the sand and left. Bond realized that they must have spotted Honey's boat on the radar, mistaking it for Bonds.

The Guard Dogs on Crab Key

Dr. No's men were merciless, and killed Quarrel with the flame thrower. They then took Bond and Honey into a sophisticated decontamination lab, cleaning them before sending them into the guest Quarters. The doors of the rooms could only be opened from the outside, but the rooms were luxurious. Later on, Bond was taken into a prison cell, a small room with nothing but an air vent. The grate of the vents were electrocuted, but Bond smashed it and climbed through. The vents transversed all around the lair, with a central pipe that carried boiling hot water down.

He stole someones radiation suit and went into the Control room, which contained the reactor and many monitoring tools. He went over to the main controls and overpowered the reactor. Everyone evacuated the place, just as the entire island blew into pieces, killing Dr. No and his dreams.