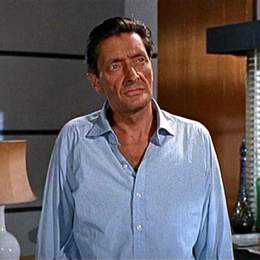 Professor Dent is a fictional character who appeared in Dr. No (1962). He worked as both a geologist and as a Henchmen for Dr. No. He was responsible for the deaths of John Strangways and his secretary and he was later killed by Bond, the same person he had just tried to assassinate.

Professor Dent is a fictional character who appeared in the 1962 James Bond movie Dr. No. He was a professional geologist who worked in a lab in Kingston, Jamaica. He also worked as a henchman for Dr. No, who was attempting to sabotage missile launch programs with a high powered radio beam, powered by a nuclear reactor on his private island Crab Key.

John Strangways, the local representative of the British Secret Service, had collected some samples from Crab Key and sent them to Dent to be analyzed. Dent alerted Dr. No, and Strangways and his secretary were later murdered by three henchmen. When Bond came to investigate, he first met Dent at the Queen's Club, where he, Strangways, and two other officials had often played cards together.

Bond noticed that Dent was the only person who had seen Strangways new secretary, and suspected that he had been involved with the assassinations. Dent was questioned by Bond about some samples Strangways had sent to be analyzed and Dent claimed that he had brought in some worthless rocks, thinking they were valuable. When Bond went to check the boat that Strangways had taken to Crab Key, he noticed a high Geiger counter reading, meaning the samples were radioactive. Dent knew that Bond would investigate Crab Key and on Dr. No's orders, he put a black widow spider in Bond's bed.

Later on in the movie, Miss Taro, who was also working for Dr. No, invited Bond to her house to lure him into a trap. He was chased by three henchman but managed to escape, killing them and arriving at his destination. A surprised Miss Taro answered the door and when she received a call from Dent, she told him that Bond was with her. Dent told her to keep him there so he could come along later and kill him. Bond suggested going out for dinner and called for a cab. However, he had actually called Government house and Miss Taro was arrested.

Bond waited for Dent, putting some pillows under the sheets of the bed to make it look like he was sleeping. Dent came in and emptied his gun into the pillows, falling into Bond's trap. Bond, with his gun in hand, turned on the lights and told Dent to drop his. Dent did so, but he later picked it back up and tried to shoot Bond. He was out of bullets having shot the pillows however, so Bond said "You've had your six" and killed him.

Professor Dent did not appear in Ian Fleming's Dr. No (1958), however one of the card players at Queen's Club that often played with Strangways and the others was a mathematics Professor from Kingston University. The character was only briefly mentioned and had no affiliation with Dr. No. Perhaps the Professor's title and his part in the card group at Queen's Club inspired the screenplay writers to create Professor Dent.