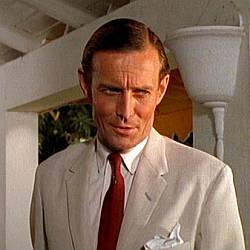 John Strangways was the MI6 representative in Jamaica. He investigated reports about the island Crab Key and took rock samples, thinking they were radioactive. He brought them to geologist and friend Professor Dent to be analyzed, and was later killed after Dent reported the events to Dr. No, the owner of Crab Key.

In the 1962 movie Dr. No, John Strangways was the MI6 representative in Jamaica. He often played cards at the Queens Club in Kingston Jamaica with Professor Dent and two officials from the island. His character was similar to that in the novel, except in the movie he wore no eye patch. Every Night at the exact same time, Strangways would leave the Queens Club and drive to his bungalow out of town. His secretary would have the equipment ready so he could promptly make a report to HQ.

One night he went to the island Crab Key and collected some rock and mineral samples with the help of a fisherman named Quarrel. He thought the samples were radioactive so he sent them to geologist Professor Dent. Unfortunately Dent was a henchman for Dr. No, the man who owned Crab Key and who was using a nuclear reactor to power a missile interference plot.

On what seemed to be just a normal night, Strangways left the Queens Club and walked to his car. Three blind beggars passed him and he dropped a coin in there tin. He was unaware however that the men were actually Dr. No's henchmen and they turned around and shot him. A hearse tore around the corner and picked Strangways up, stopping at his bungalow for his secretary and taking the bodies away, never to be seen again.

A little known fact is that Timothy Moxon didn't provice the voice of Strangways, who was actually dubbed by Robert Rietty.

John Strangways is a fictional character who appeared in Ian Fleming's novels Live and Let Die (1954) and Dr. No (1958). He was the Regional Control Officer for the Caribbean, or more plainly put, the local representative of the British Secret service. He was a tall, lean, humorous and good looking man who wore a black patch over his right eye. He was a former Lieutenant-Commander in the special branch of the Royal Navy Reserves who had been recruited to MI6.

Strangways was a regular at the Queens Club and his Black Sunbeam Alpine would often be seen parked outside along with the cars of the head of the Caribbean defence force, the islands best lawyer and a mathematics professor. He played bridge with these three friends most nights, but always had to leave just before 6:30 to contact HQ.

At the same exact time every night, Strangways would leave the club and drive to his bungalow. His secretary Mary Trueblood would prepare the equipment and start the contact, then Strangways would come in and takeover at exactly 6:30 and make a report. If he missed the 6:30 call, there was a blue call at 7:00 and finally a red call at 7:30. Failure to answer the red call resulted in total radio silence and an emergency alert.

Strangways had never missed the 6:30 call, and was obviously a very organized and disciplined man. However, one night at Queens club he had a different fate. He left his three friends and walked out of the club to his car where he met three blind beggars. He gave them some money and walked on, but the three men didn't leave. They were actually assassins working for Dr. No.

Strangways had been investigating an interference on Crab Key, an island owned by Dr. No. A society of bird lovers had complained about the death of rare birds and men had been killed in a camp on the island. Dr. No sent three of his best men to assassinate Strangways so there would be no further interference with the island or with Dr. No.

The three 'blind beggars' turned around and shot Strangways, the man who had just given them money. A hearse sped around the corner and into the club parking area to pick up the body. They then proceeded to the Mona Reservoir and dumped his body there, with his secretary Mary Trueblood next on the agenda.