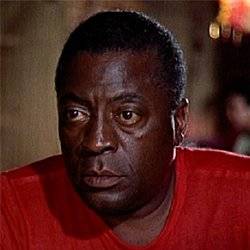 Quarrel was a fictional Cayman Island fisherman who first appeared in Ian Fleming's novel Live and Let Die, published in 1954. He later appeared in the novel Dr. No, published in 1958 and in the movie Dr. No in 1962. He helped out Bond, taking him to the island Crab Key to investigate Dr. No.

When Bond went to Jamaica to investigate the death of Strangways, CIA agent Felix Leiter was waiting for him. When he saw Bond drive off with the opposition, he followed him, with Quarrel driving. Bond later went to find Quarrel and after a brief fight between them, Felix went in with a gun and realized it was Bond and not the opposition.

Quarrel told them that he had taken Strangways to Crab Key, and he showed Bond where he had put the rock samples in the boat. The boat gave off a high Geiger radiation reading and confirmed Bond's suspicions about Crab Key. He and Quarrel later went to the island in a boat. Quarrel feared the island because it was rumoured to contain a dragon and he had known friends who went and were never seen again.

They arrived on the island at night, and when they woke up in the morning they met Honey Rider, a girl diving for rare shells. Quarrel heard a high speed boat and they all hid. The people on the boat noticed Honey's canoe and started shooting all around it, saying they would be back with the dogs. Honey's boat was ruined, so she went with Bond and Quarrel, showing them a good hiding place up river. 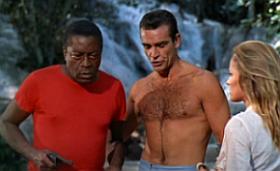 Quarrel cut some hollow bamboo sticks so that they could breath underwater and remain undetected by the dogs. After the men had passed, they continued up the river into a swamp. The islands dragon turned out to be run on diesel and it drove through the swamp after them. Bond decided to take out the lights while Quarrel took out the drivers. Quarrel couldn't find an opening in the bush, so he moved forward to the next one and started shooting at the drivers. The dragon was too well protected however and Quarrel came to a gruesome end when the flamethrower burned him to death.

The character in the books

Quarrel was a Cayman Island fisherman who first appeared in Ian Fleming's novel Live and Let Die, published in 1954. In the novel, the SMERSH agent Mr. Big was smuggling 17th century gold coins into Harlem and Florida. Near the end of the book, Bond discovered that Mr. Big would soon be picking up the last of the coins in Jamaica, and knew he would have to travel through shark and barracuda infested waters to plant a limpet mine on his ship.

Bond first met Quarrel in Jamaica when he came over with the Head of Station John Strangways. Quarrel was a tall Jamaican with grey eyes and was wearing a blue shirt and brown woven trousers. He had come to train Bond for his underwater adventure and to make sure he was fit. He made Bond swim a mile up the beach every day and then jog back. They would then go out in a boat and Quarrel would teach Bond about the creatures of the sea and which ones would attack and how to scare of barracuda. When Bond was nearly ready to go Quarrel helped him check the gear and made sure he knew how to use it.

Quarrel met up with Bond five years later in Ian Fleming's Dr. No, published in 1958. Bond was back in Jamaica investigating the death of John Strangways. Quarrel picked Bond up at the airport and later took him to the Joy Boat Club owned by a man called Pus-Feller. Years before, Quarrel and Pus-Feller had shared a boat and went fishing together. When Pus-Feller only just escaped an attack by an octopus, he sold his share of the boat to Quarrel and started up a restaurant.

Bond suspected that a man called Dr. No had ordered the death of Strangways and he knew that he was on the island Crab Key. Quarrel feared Crab Key due to rumours of a dragon, although he agreed to go anyway after asking Bond to take out life insurance on him. Quarrel rented a canoe and sailed to Crab Key with Bond later that night. When they woke up, a beautiful girl named Honey Rider was collecting shells. She had left her sail up when she arrived and had attracted Dr. No's men.

The men came in a high powered boat and saw Honey's half hidden canoe. The men said they were coming back with the dogs and as soon as they left, Quarrel, Bond and Honey went down the river to hide. After they evaded the dogs, they headed for an old campsite. The islands dragon turned out to be a tractor with a flame-thrower and it came driving toward them. Bond got his gun out and told Quarrel to shoot the drivers while he got the lights and the tires.

Quarrel moved forward to the next bush to get a good shot but the vehicle was too well protected and Quarrel came to a gruesome end when the flame thrower burned him alive.