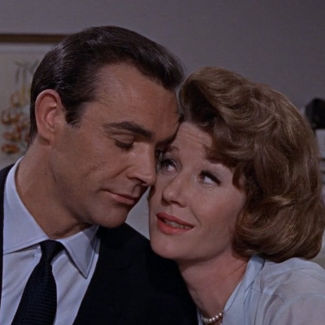 While Miss Moneypenny isn't strictly a Bond girl, she is one of the most iconic characters within the James Bond series. Moneypenny works at MI6 as M's secretary, and throughout most of the films demonstrates an infatuation with James Bond.

The Many Faces of Miss Moneypenny

Moneypenny's first appearance in the James Bond universe is in the original book, Casino Royale. She has appeared throughout Ian Fleming's novels, although in a smaller role than in the movies, but the theme remains the same: Moneypenny is infatuated with Bond but never does anything to act upon her infatuation.

Many people have been credited for being Ian Fleming's inspiration for the Moneypenny character. In Fleming's first draft Moneypenny was originally named Miss "Petty" Pettaval, who was a secretary to real-world MI6 Director, Stewart Menzies. The name was later changed to be less obvious. The character has also been rumored to be based upon Vera Atkins who was a secretary to "legendary spy master" Maurice Buckman who was Fleming's inspiration for M, among others.

Throughout the films, upon Bond's arrival at M's office, he flirts with Miss Moneypenny. In the earlier movies these flirtatious moments included Bond kissing and caressing Moneypenny sensually, but in more recent films the flirtation is more lighthearted and marked by an exchange of witty banter and sexual innuendos. What doesn't change across most of the films is Moneypenny's devotion to Bond despite their relationship never being anything more than professional.

Because of their professional, but flirty relationship, Moneypenny is often considered an anchor that adds a bit of additional realism to the Bond films.

To date, Moneypenny has been portrayed by six actresses across twenty one Bond films. Fourteen times by Lois Maxwell, twice by Caroline Bliss, four times by Samantha Bond and once each by Barbara Bouchet, Pamela Salem and Naomie Harris.

Terence Young, who directed the first Bond film (Dr. No) originally turned her down for the role based on his opinion that she "looked like she smelled of soap." Maxwell fought to be cast for the role, as her husband was recovering from a heart attack at the time and she needed the money. Her role in the first film only paid £200 and Maxwell was required to provide her own clothes.

Maxwell was nearly recast in 1967 after appearing in a spy spoof film alongside Sean Connery's brother Neil (aptly titled Operation Kid Brother) and then again in 1971 after demanding a pay raise. She managed to hold on to the role for several years afterwards, though. She remained in the role of Miss Moneypenny until Roger Moore's final appearance as Bond in 1985's A View to Kill.

She continued using the name of her character for years after leaving the film series. Right up until 1994, Maxwell wrote a column about her on set experiences for a Canadian newspaper under the character's name.

Appearing in two Bond films, The Living Daylights and License to Kill, Bliss portrayed the role of Miss Moneypenny alongside Timothy Dalton between 1987 and 1989.

Over 30 years younger than Lois Maxwell, Bliss was only 26 when cast for the role. The role was recast to bring in a younger actress, allowing the films to maintain the realism of the flirty relationship with a younger Bond.

In an attempt to distance herself from the iconic-at-the-time portrayal of Moneypenny by Lois Maxwell, Bliss opted to have her version of Moneypenny wear glasses.

Shamefully enough, due to script limitations the flirty relationship was actually quite limited in these two films, with Bond typically ignoring Moneypenny's flirtations.

Following the trend of "One Moneypenny per Bond" that began in the Dalton era, Samantha Bond played the role alongside Pierce Brosnan throughout his four film run from 1995 to 2002.

Samantha Bond was actually childhood friends with previous Moneypenny, Caroline Bliss. When asked in an interview about being replaced by a friend of hers, Bliss responded, "I am just glad it has gone to someone I love and who needs the money!"

Often credited with being the first Moneypenny to have kissed James Bond, it is usually implied that it is the first time the two characters had shared a kiss, which is incorrect. It is actually just the first time where the character initiated a kiss with James. But that itself isn't even entirely true either, as the kiss was within a virtual reality device created by Q, and was basically just a "dream sequence." It is likely, though, that she is the first Moneypenny to jokingly accuse James Bond of sexual harassment.

In an interview, Samantha Bond has stated "Even if you rolled all four films into one, it's still the smallest part I've ever played. It's the character that's iconic rather than anything I did with it." when asked what she thinks of being called Miss Moneypenny years after her last appearance in the role.

Barbara Bouchet is the only Moneypenny to not really be Moneypenny. More specifically, in the first iteration of the film Casino Royale (1967) Bouchet plays Miss Moneypenny's daughter.

The first Casino Royale is the first of two Bond films to be made by a different production company, and doesn't necessarily follow the same format of the core series. In fact, the earlier version of Casino Royale was made to be a satirical spin-off of the Bond series due to the producers belief that they couldn't compete with the core production team.

The explanation provided within the film of Bouchet playing Miss Moneypenny's daughter is a little bit unnecessary - throughout the rest of the film she is referred to only as Moneypenny.

The second of two actresses to play the role in the unofficial Bond films, Salem portrayed Moneypenny in 1983's Never Say Never Again. She is the only actress to play the role alongside Sean Connery, other than the original Moneypenny, Lois Maxwell.

The newest Moneypenny and an entirely brand new take on the character. Following the reboot of the series in 2006, the Moneypenny character had yet to appear in a Bond film alongside Daniel Craig. With 2012's Skyfall, Moneypenny is back with a more complete backstory and even a first name.

As a field agent who considers herself Bond's equal, Moneypenny makes some mistakes. Throughout the course of the movie she becomes M's secretary, putting her in the place of the Moneypenny we know and love.

There is also debate among critics as to whether or not Harris portrays the first Moneypenny to have slept with James Bond, but it is never suggested directly in the films that she has.

Throughout Skyfall's development, it was kept secret that Naomie Harris was portrayed the Moneypenny role. Throughout the movie she goes by her first name only and it is later revealed that her last name is Moneypenny.

While it's too early to tell how this most recent iteration of the Moneypenny character will compare to the previous versions, it's reassuring to see the new films returning to the roots of the series and bringing back such iconic characters.