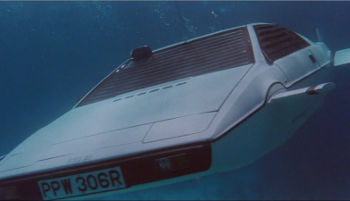 For the tenth Bond film, The Spy Who Loved Me, the producers wanted to out-do themselves and create the most spectacular film of the series. They equipped Bond with a white Lotus Esprit S1 in a chase sequence covering land, air and water. With the beautiful Barbara Bach in the passenger seat, Bond is chased on land by a motorbike equipped with a jet-propulsion sidecar rocket, and a car containing the armed henchmen Jaws.

After eliminating their land problems, they are attacked from the air by a helicopter equipped with large machine guns. A game of cat and mouse ensues along the mountain roads, and unable to lose the tail, Bond drives off the edge of a peer. The Lotus transforms into a mini submarine, and the helicopter is quickly eliminated with a sea-to-air missile. Not giving up, the enemy brings on their underwater assault, with armed frogmen, underwater missiles and torpedo-equipped submarines. The Lotus handles them with ease and Bond transforms the vehicle back to a car and drives out of the sea onto a beach of unsuspecting tourists. 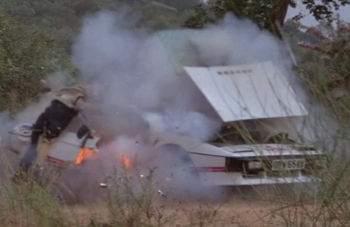 Following the well received appearance in The Spy Who Loved Me, Lotus returned for a second and final time in For Your Eyes Only, with an upgraded Lotus Esprit Turbo. Not wanting to appear stale and repetitive, the producers decided against using the Lotus for another chase scene, especially considering it was virtually the same model and color. Instead, it was used as part of a few jokes.

Bond drives the Esprit to the hideout of Hector Gonzales, but when it comes time to escape, the car meets with an ill fate. One of Gonzale's henchmen approaches the Lotus and--ignoring the "burglar protected" sticker--smashes the passenger window. Q's self destruct system promptly kicks in, blowing the car and the henchman to pieces. In a later scene in Q's lab, Bond spots a replacement car and jibes "I see you managed to get the Lotus back together again." 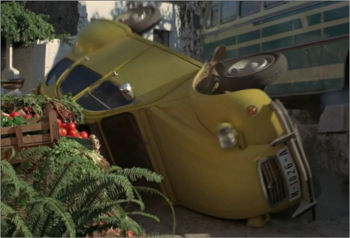 After his Lotus self-destructs, Bond is forced to escape in Melina Havelock's car. To his despair, she drives a Citroën 2CV, not quite the calibre of car Bond is used to. The fire of machine guns behind him soon ends his hesitation, and the amusing chase scene begins. After Melina manages to topple the car upside down, some local villagers help to get it back on its wheels, and Bond takes over the driving.

The Citroën had to be fitted with a bigger engine to make it suitable for a tense chase scene. Even still, some segments of the scene were very obviously sped up, most noticeably during a backwards-forward stunt that the 2CV struggled to pull off. However, the scene was intended to be as humorous as it was tense. 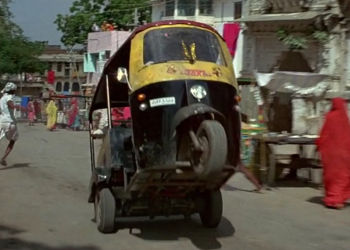 The Bajaj RE is a model of auto rickshaw, also known as a Tuk Tuk taxi, that appeared in Octopussy. After winning a high stakes backgammon game against Kamal Khan, Bond leaves in a taxi with ally agent Vijay. He soon spots Khan's henchman Gobinda in the taxi behind, armed with a muzzled shotgun. Bond tells Vijay "we've got company", to which Vijay replies "No problem, this is a company car."

It is indeed a company car, outfitted with a powerful engine by Q-branch. Vijay quickly accelerates, bringing the taxi on its back two wheels in the process. A tense chase follows, with a few in-jokes thrown in. The actor playing Vijay was a professional tennis star, and during the chase scene he fends off some assailants with a tennis racket, as an audience in the street move their heads back and forth as if watching a tennis match. 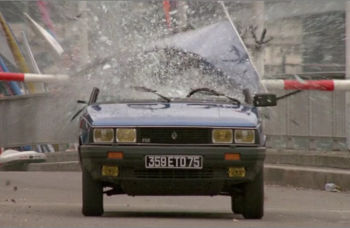 After henchwoman May Day parachutes off the top of the Eiffel Tower, Bond must act quickly to catch her. He commandeers a Renault taxi, and executes a few stunts to keep up the pace, driving up a ramp and across the roof of a bus to get through some heavy traffic. However, as he drives off the roof and back onto the street, he crashes into a stop barrier, slicing the roof of the Renault right off.

With his eyes on May Day instead of on the road, Bond gets hit by an oncoming car, and the whole rear half of his taxi gets sliced off, resulting in him scraping along the road with only two wheels. He manages to keep the car under control, stopping at the side of a bridge to continue his chase on water. 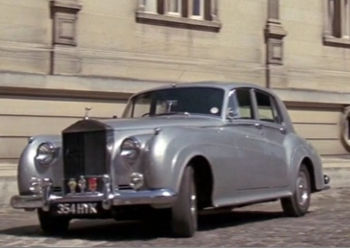 This particular Rolls Royce has a long history within the Bond franchise; it was the personal car of James Bond producer Cubby Broccoli. Cubby had purchased it in August 1962, perhaps to celebrate the end of post-production for the first Bond film, Dr. No. The registration number was "CUB1", and was often seen in Cubby's personal parking space at Pinewood studios. In 1965, the Rolls had a brief cameo in Thunderball, shown in the car park of the fictional Shrublands health clinic.

Twenty years later it became the main Bond car in A View to a Kill, albeit with a different licence number. The Rolls is driven by Sir Godfrey Tibbett, an MI6 agent posing as Bond's chauffeur. After strangling Tibbett in a car wash, Henchwoman May Day captures Bond and knocks him unconscious. She then pushes the Rolls into a lake with Bond and Tibbett inside. Bond comes to and uses the air from the tires to breath underwater until May Day leaves the scene. A 1958 Bentley S1 doubled for the Rolls during the lake sequence. 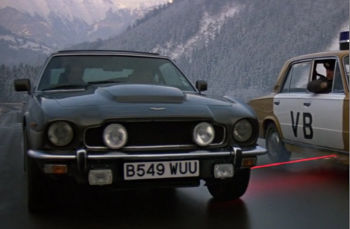 With the introduction of a new James Bond, Timothy Dalton, in The Living Daylights, the producers brought back an Aston Martin after an 18 year absence. The Aston Martin V8 was kitted out with gadgets in the style of Goldfinger's DB5. It had a control panel under the arm rest with buttons to operate lasers, missiles, outriggers, a rear rocket propulsion system and tire spikes for added traction control. It also had an all-band police radio receiver, a heads-up missile guidance display on the windshield, and a built-in self-destruct timer.

Ironically, the design of the V8 is virtually unchanged from that of the DBS Bond drove in 1969's On Her Majesty's Secret Service. This tidbit of trivia serves to illustrate the lasting value of such a beautiful design. However, it may also help to explain Aston's long absence from the series; the unchanging designs would have proved too monotonous for Bond. 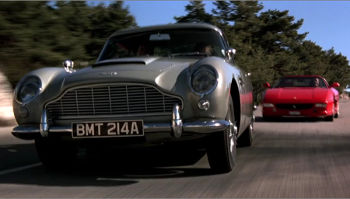 The famous Aston Martin DB5 returned for Pierce Brosnan's introduction as James Bond in Goldeneye. MI6 psychologist Caroline has been sent to evaluate Bond, who takes her for a drive in the DB5. They are soon enticed into a friendly race by the Ferrari Spider 355 wielding Xenia Onatopp. Although in reality the DB5 wouldn't come close to matching the Ferrari's speed, Bond manages to take the lead.

The fast driving manages to scare his passenger Caroline, who asks him to stop the car at once. Bond complies, putting on the handbrake in an abrupt emergency stop, replying "as you can see, I have no problem with female authority." He then reveals a bottle of Bollinger champagne hidden under the armrest. The DB5 returned briefly in Tomorrow Never Dies, though it was not part of a chase scene.