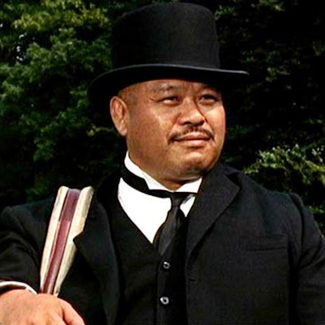 Oddjob --played by Harold Sakata-- is a ruthless villain and Goldfinger's personal bodyguard. Armed with a steel rimmed hat and a good knowledge of karate, Oddjob is a deadly character. He is perhaps one of the most legendary villains in James Bond. 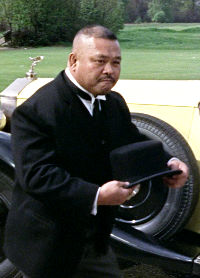 In the 1964 James bond movie Goldfinger, Oddjob was Auric Goldfinger's personal bodyguard, an exceedingly strong and muscular killer. He killed Jill Masterson, painting her from head to toe in gold paint, as revenge for her having helped Bond catch Goldfinger cheating at cards.

His main weapon, a deadly steel rimmed bowler hat, was used to kill Tilly Masterson, while she was trying to avenge her sister's death. When driving to the airport, he shot Mr. Solo (a man doing business with Goldfinger) and later crushed the car with him inside.

Oddjob was a very brave man, as seen when he stayed inside the Fort Knox vault with an active bomb, to stop Bond and a guard from escaping. A fight ensued between Bond and Oddjob, and Bond eventually managed to get the rimmed hat. He threw it at Oddjob, but missed, lodging it between some metal bars behind him. Oddjob went to retrieve the hat, and just as he grabbed it, Bond touched a live wire to the bars, electrocuting Oddjob and bringing him to his ultimate death.

In Ian Fleming's book Goldfinger (1959), Oddjob was a Korean bodyguard and chauffeur for Goldfinger. He was a ruthless killer, and the main villain of the story. He wore a steel rimmed bowler hat and shiny black gloves. His fingers were strong, muscular and all the same length with no nails. His toes were the same. His hands and feet were hardened into layers of corns.

Oddjob was one of the three men in the world who possessed a black belt in Karate. Due to his poor background, he considered cat to be fine cuisine. He was given Goldfinger's cat after it was discovered that Bond had used it to destroy a reel of film containing incriminating evidence. Near the end of the book, Bond met Oddjob on a plane, and a fight ensued. Bond smashed the window, the cabin depressurized, and Oddjob was sucked out of the plane to his death. 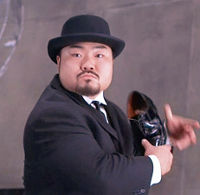 One of the most notable spoofs of Oddjob is in Mike Myers' 1997 Bond spoof Austin Powers: International Man of Mystery. The character "Random Task" appears with a steel rimmed shoe, and uses it to break off the head of a statue, just like Oddjob had done with his hat in Goldfinger.

Random Task is Dr. Evil's finest killer, but dies after attempting to kill Austin Powers with his shoe. Instead of slicing through his jugular as intended, the shoe just causes a minor annoyance, to which Austin replies "Honestly, who throws a shoe?". Random Task didn't return for any of the Austin Powers sequels. 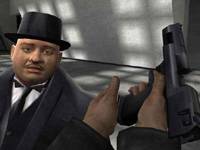 Oddjob has appeared in many James Bond video games. Mostly he has been an unlockable character in the multiplayer levels, as he was in the game From Russia with Love. In the game Nightfire, Oddjob's hat can be used for an instant kill.

In the game Goldeneye: Rogue Agent, Oddjob is an actual character and is part of the storyline. Oddjob attacks you and you fight him off and then throw him down after a bomb.

Oddjob was also an unlockable in Goldeneye for the Nintendo 64, which was recently voted the best film based video game of all time. It is certainly the best James Bond game, and even spurred a remake for the Wii.

There are many Oddjob toys, models, ornaments, figurines and even foreign trading cards available like the ones below. Oddjob is even featured in some sets of characters. Most if not all of this legendary character's merchandise is now rare and highly collectible