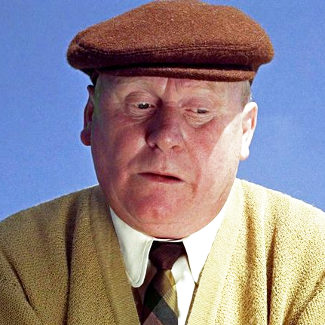 Auric Goldfinger was a gold smuggler that made plans to break into Fort Knox in Kentucky, to explode a nuclear bomb. His goal was to contaminate the entire gold supply of the United States, to increase the market value of his own holdings. 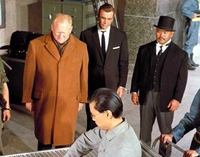 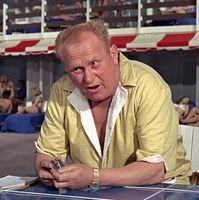 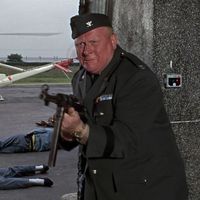 Auric Goldfinger was a professional gold smuggler who smuggled gold into Switzerland, where it was melted down, recast, and sold tax free. Bond first hears of Goldfinger through M, whose contact, Colonel Smithers of the Bank of England, suspects Goldfinger of smuggling.

Smithers can't prove that fact however, as Goldfinger is too intelligent, melting the gold down and recasting it as the body of his cars, which go through the airport without suspicion. Bond meets up with Smithers to be briefed on the issue, and it is suggested that Bond should meet Goldfinger in a social surrounding.

Bond goes to Goldfinger's golf club, and arranges for his original partner to be busy, leaving only Bond left for Goldfinger to play with. The two start off with a friendly game, until Goldfinger offers a raise in stake. Bond replies by throwing down a £5000 bar of gold bullion.

The two play an intense match of golf, and Bond catches Goldfinger cheating, realizing that his caddy Oddjob is planting fresh golf balls whenever Goldfinger's ball is caught deep in the rough. Instead of calling him out, Bond lets him continue, covertly switching Goldfinger's ball for another brand. At the end of the game, Bond points out that his ball has changed, and calls it a forfeit by strict rules of golf, winning their £5000 bet.

Bond tails Goldfinger to his headquarters in Switzerland, and overhears a conversation mentioning Operation Grandslam. After retreating to the woods to continue monitoring the complex, Bond intercepts Tilly Masterson, who is trying to assassinate Goldfinger to avenge the death of her sister, Jill Masterson.

In the resulting confusion, the two trip a security cable, and Bond is captured. He wakes up bound to a table below an industrial laser, which is slowly moving up between his legs, cutting through the metal.

However, having overheard the name "Operation Grandslam", Bond convinces Goldfinger that he knows more about the operation, and that killing him would attract more attention from MI6. Goldfinger reluctantly accepts, and lets Bond live. He flies Bond out to Kentucky and locks him up in a prison cell.

Bond escapes the prison and overhears Goldfinger's plans to detonate a bomb in Fort Knox. Annoyed by his intrusions, Goldfinger takes Bond along to his Fort Knox raid, intending to leave him to die in the vault, and be killed by the radioactive blast.

Unfortunately for Goldfinger, Bond managed to turn his pilot Pussy Galore against him, and the military are in place waiting for him. Goldfinger's men are all killed, and Bond manages to stop the detonation of the bomb with only 007 seconds left to go. Goldfinger escapes and hijacks Bond's plane, to take his revenge. But, in a struggle with Bond, his gun goes off and shoots out a window of the plane. The loss of pressure causes Goldfinger to be sucked out of the plane to his death.

Goldfinger was one of our Top 10 Bond Villains »