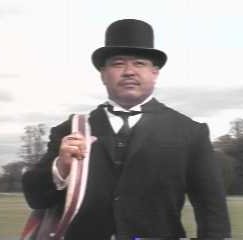 Harold Sakata was an actor and weightlifter most famous for his stunning performance as Oddjob in the James Bond film Goldfinger (1964).

Harold Sakata was born in Hawaii as Toshiyuki Sakata, changing his name to Harold when he moved to a more central part of America. In his late teens, Harold was lean and somewhat underweight, so he started lifting weights to build himself up. He became a professional weightlifter, and at the age of 28 won a silver medal for the United States in the Summer Olympics Light-Heavyweight event, lifting an astounding 380 pounds. His weightlifting background led him into professional wrestling where he became a champion in several competitions under the name Tosh Togo.

Prior to playing Oddjob in the 1964 James Bond movie Goldfinger, Harold had absolutely no acting experience. But his strong build and muscular appearance won him the non speaking role of Oddjob, Goldfinger's personal bodyguard. After this legendary performance, Harold starred in many other films, sometimes playing characters similar to Oddjob.

Milton Reid, a professional wrestler who had played Dr. No's bodyguard in the first James Bond film Dr. No, had initially challenged Sakata to a wrestling match, with the idea that the winner would play Oddjob. The producers however, didn't want to reuse actors, so they chose Harold without the match ever taking place.