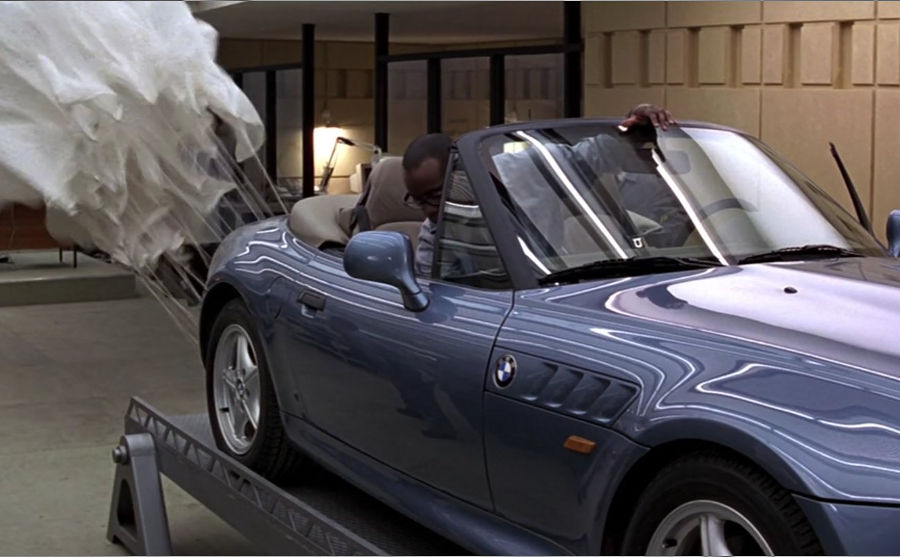 Goldeneye was the first film of the series to put Bond in a BMW. Q introduces the BMW Z3 in his laboratory after his assistants demonstrate the parachute breaking system. Q briefs Bond on the ejector seat, the all-points radar, and his personal favourite: stinger missiles housed behind the headlights. Despite the impressive show of gadgets, none of them were used in the film, and the car only appeared in one more brief scene. Bond drives to meet CIA agent Jack Wade to pick up a small plane. He throws Wade the keys to the Z3, with a warning not to touch any of the buttons.

The product placement worked a treat, causing a huge spike in sales for BMW. They received over 15,000 orders for Z3s, and it took over a year to fulfil them. Goldeneye was the first of three back-to-back films in which Bond drove a BMW, before they were dropped in favour of Aston Martin. 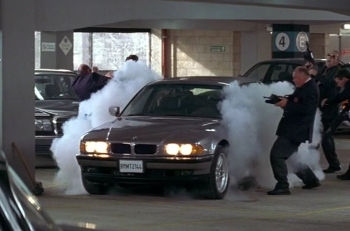 After teasing the unused gadgets of the Z3, BMW returned for Tomorrow Never Dies with the most impressive car gadgets of the decade. The BMW 750iL features bullet proof windows and body that can withstand being hit by a sledgehammer. The door handles can also be electrified, shocking any would-be thieves. The car can be driven by remote control via Bond's special Ericsson Mobile Phone, complete with touchpad controls.

Bond uses the phone to activate a tear gas attack, stunning the henchmen standing around his car. He then remotely drives the car around a corner, and jumps in through the rear window while the car is still in motion. A high tension chase ensues, with Bond driving from the back seat the entire time. He uses various gadgets, such as roof-mounted missiles, tire spike dispenser, reinflating tires and a front-mounted steel wire cutter. To lose the enemy, he bails out of the car and drives it off of a rooftop car park into an Avis rental shop. 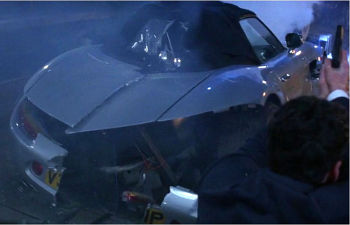 The World is Not Enough featured the BMW Z8, and was the end of a stream of product placements from BMW. Introduced to Bond by R, Q's new assistant played by John Cleese, it appears as though they were running a little short on ideas. R mentions that the Z8 features titanium armor, a multi-tasking heads up display and six beverage cup holders, with no other gadgets mentioned.

Out in the field, Bond is being chased by a helicopter, and uses the Z8 keys to release the handbrake and drive the car forward so that he can get in without losing his cover. Bond then uses a gadget built into the Z8's steering wheel to launch a surface-to-air missile to take down the helicopter. Unfortunately for Bond, another helicopter arrives complete with a metal cutting gadget, and cuts the BMW in half. 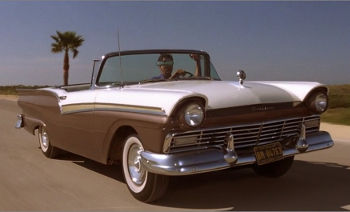 After getting some valuable information from Havana MI6 agent Raoul, Bond asks to borrow a gun and a fast car. Perhaps as a joke, he is given a 1957 Ford Fairlane. Bond drives the Ford along a picturesque highway to his hotel, and the car isn't used or seen again. It appeared only briefly and wasn't equipped with any gadgets, being used solely for transportation.

It's possible that the Fairlane is a homage to Thunderball, where SPECTRE agent Count Lippe drove a similar car when trying to take revenge on Bond, only to be killed himself by another SPECTRE henchwoman. However, the car Count Lippe drove was a different color, and wasn't a convertible. 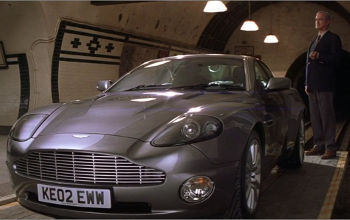 As introduced by John Cleese, playing Q, "Aston Martin call it the Vanquish, we call it the Vanish." Die Another Day put Bond in an Aston Martin V12 Vanquish, complete with an invisibility cloak that has been widely quoted as the most ridiculous gadget in a James Bond film. Q notes that the Aston has all the usual refinements, including an ejector seat, torpedos, and target seeking shotguns mounted on the bonnet.

The Aston features in an elaborate 7 minute chase sequence around Gustav Graves' ice palace. It begins when a snowmobile crashes into the Vanquish when its invisibility cloak is activated, giving away Bond's location. Henchman Zao gives chase in an equally gadget-filled Jaguar, using a thermal imaging screen to detect the Aston. Bond and Zao use rockets, machine guns, ejector seats and missiles in their cat-and-mouse chase. 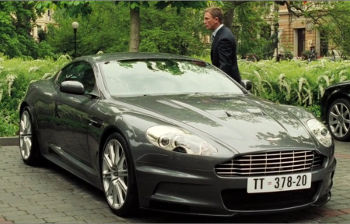 Casino Royale was the big reboot of the series, to give James Bond a more serious tone. Daniel Craig came equipped with the latest Aston Martin DBS V12, but the gadgets were minimal and realistic. There were two hidden trays housing a defibrillator and a silenced Walther PPK, contrasting the ridiculous gadgets of the prior film. The name 'DBS' was recycled from a discontinued model from the late sixties, which Bond had driven in On Her Majesty's Secret Service.

When Le Chiffre kidnaps Vesper Lynd, Bond drives after them in the DBS and into a trap. Le Chiffre uses his head start to his advantage, leaving Vesper tied up in the middle of the road just after a small hill. When Bond drives over the hill at speed, he spots Vesper, and swerves to avoid her, resulting in a world record breaking series of 7 flips in an intense crash that leaves Bond unconscious and in the hands of the enemy.

In the next Bond film, Quantum of Solace, a slightly darker DBS V12 returned for a intense chase sequence along a mountain-side road, in which the driver door was completely ripped off! 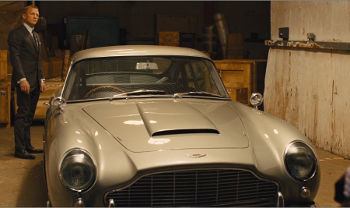 The DB5 returned yet again in 2006's Casino Royale, where Bond won the car in a poker game against Alex Dimitrios. To add insult to injury, Bond used the DB5 to steal Dimitrios' girlfriend.

In Skyfall, Bond rescued M from an attack by Raoul Silva, and decided to take her to Scotland to lure Silva into their territory, and to avoid the loss of innocent lives in the crowded London. Bond stopped by a garage, telling M that they would have to switch cars, as the MI6 cars all have trackers. Bond opened the door to reveal the DB5, and they drove together to Scotland, M complaining the car was uncomfortable, and Bond jokingly threatening to use the ejector seat.