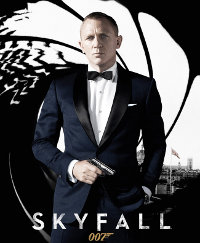 A full 2 minute trailer has been released for Skyfall, the final version before the film's opening day on October 26th. The trailer contains segments from earlier teaser trailers, but also includes some new, previously unseen footage.

With early critical praise, it has been speculated that Skyfall may be the first 007 film to bring in over $1 billion at the box office. When adjusted for inflation, Thunderball is the top grossing Bond film of all time, making just over $1 billion. Daniel Craig's two previous outings Casino Royale and Quantum Of Solace ranked as the 6th and 9th top grossing Bond films, respectively.