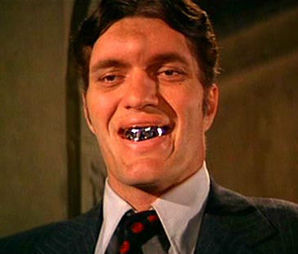 Jaws--played by 7ft giant Richard Kiel--is the steel jawed henchman, and later allie, from The Spy Who Loved Me and Moonraker. Jaws is one of the only villains to make multiple appearances, and has become an icon for the James Bond series.

The Spy Who Loved Me 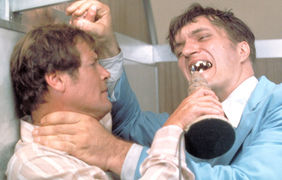 Jaws was introduced as Karl Stromberg's ruthless henchmen in The Spy Who Loved Me. James Bond and agent Triple X were negotiating with the shady Egyptian businessman Max Kalba over the sale of microfilm plans. The meeting, however, was cut short as Kalba was called away for an important phonecall, that turned out to be a trap.

Jaws lured Kalba into a secluded phonebooth, stole the microfilm for himself, and killed Kalba by biting him in the neck with his sharp steel teeth. Disguised as a telephone repair man, he got into his van and drove away just as James Bond and Triple X snook into the back. On his way through the desert toward the ruins of an ancient temple, Jaws is shown smiling as he spys on Bond's conversation, via a hidden microphone.

When they arrive at the temple, Jaws tries to kill Bond by toppling over a heavy stone block, but is later crushed under building rubble after Bond knocks down some of the repair scaffolding. Jaws manages to free himself, but the two spies escape in the repair van, after Jaws' failed attempt to rip the van to pieces to stop them.

Near the end of the film, Jaws and Bond run into each other again, and Bond uses a magnet to pick up Jaws by his metal teeth, dropping him in a shark tank. Jaws kills the sharks with his teeth and manages to get to safety, but too late to kill Bond. 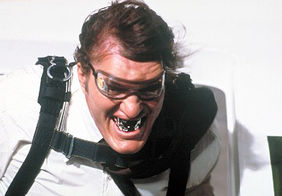 Jaws returned for 1979's Moonraker, as a more light hearted, comic version of his prior self. This time Jaws appears in the pre-credit sequence, pushing James Bond out of a plane without a parachute. There is a large fight between the two, mid-air, that ends with Bond stealing Jaws' parachute. Jaws manages to survive, as always, by safely landing on a circus tent.

Later in the film, the main villain Hugo Drax hires Jaws to kill James Bond. While Bond is in a cable car half way down a mountain, jaws kills the car operator and stops Bond's car in mid air. He then proceeds to join Bond in another car, and a fight ensues on the roof, twenty thousand feet in the air.

Jaws looses again, and his cable car crashes down into the control station. With death defying mega-villain style, Jaws manages to survive, and is rescued by a small pigtailed girl named Dolly. The two walk away holding hands, with a hint of love at first sight.

Still on a Bond-obsessed rage, Jaws gets into a boat chase, where his attempt to destroy Bond leads to a nasty drop off of a high waterfall. He of course survives, and heads into space as Hugo Drax's personal bodyguard.

When Bond sneaks aboard the space station, Jaws is ordered to kill him. However, Bond points out that his small girlfriend Dolly wouldn't match up to the standards of physical perfection for Drax's rebirth plans. Implying that they would both be double-crossed and killed, Bond manages to turn Jaws against Drax. For the films finale, Jaws helps to unjam the docking mechanism for Bond's shuttle, allowing him to escape and finish his mission. Jaws and Dolly are rescued, but don't appear again in the series.

Jaws was one of our Top 10 Bond Villains »