The gadgets of Goldfinger were a big success with fans, and the producers showed no signs of slowing down with Thunderball. The two films share many similarities in regards to gadgets. The DB5 featured in both, and many of the gadgets in the two films were introduced by Q before being used.

The iconic Aston Martin DB5, that had been the highlight of the impressive gadgetry in Goldfinger, returned once again for Thunderball. It was a mix of old and new, equipped with the same rear bullet-proof screen as before, but including the newly added water jets.

In the opening sequence of the film, James Bond escapes some gun wielding villains in a quick getaway with his strap-on jet pack. But by the time he's landed next to his Aston, and got the jet pack back in the boot, more gunmen have approached on foot. Bond gets inside, activates the bullet proof screen, and turns on the water jets, in a suave getaway that merges effortlessly into the opening titles.

007's famous Jet Pack added more excitement to the opening scene of Thunderball. It was in fact a real device, that had been developed for use in the army. It did have several limitations not eluded to in the film: it got exceedingly hot, and could only maintain flight for about 20 seconds. It has remained a fan favourite however, so much so, that Sean Connery once staged a fake jet pack landing into an interview with David Letterman. 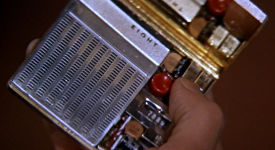 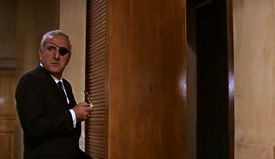 When we first meet the sly second-in-command of SPECTRE, Emilio Largo, a parking attendant is shouting at him for parking in the street. Largo turns around and gives a powerful stare, and the attendant apologies, realizing his mistake. Largo proceeds into a casual-looking building, that is really a front for SPECTRE's Paris headquarters.

Largo takes out a small cigarette case, and opens it to reveal a remote control with two buttons. The first controls a special cupboard that slides away to reveal a steel door, which is opened by the second button, leading to the SPECTRE meeting room. 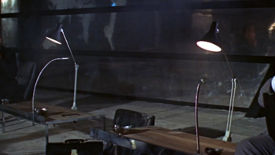 In SPECTRE's Paris meeting room, Blofeld sits on a raised stage, overlooking the long table of operatives below. Directly in front of him is a control panel that controls the lights, an interactive map on the far wall, and various other contraptions in the room.

The operatives go around the table, reporting to Blofeld what criminal activities they have engaged in in the past month. As one nervous man reports an income lower than expected, Blofeld says that an operative is guilty of embezzlement, and flicks a switch on his control panel. In a quick twist, the nervous man's partner is electrocuted in his chair. Blofeld presses a few more buttons, and the chair lowers, disposing of the dead man, and raising again, empty.

The scene was parodied in the Bond spoof Austin Powers: International Man of Mystery, where Mustafa (played by Will Ferrell) is killed in a similar manner, but ends up surviving, complaining about his severe pain through the air vents in the floor. 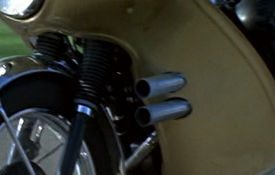 In a complex mash of secret agents, SPECTRE agent Count Lippe tries to kill James Bond, who gets his revenge by locking Lippe in a steam bath. After Lippe recovers, he drives after Bond trying to shoot him. But, in revenge for his previous failure to kill Bond, Blofeld orders SPECTRE agent Fiona Volpe to kill Count Lippe. Got it?

Fiona Volpe uses a well disguised torpedo launcher on the front of her motorbike to blow up Count Lippe's car, as he is chasing Bond. She then drives the bike over a cliff to erase any evidence. Stuntman Bob Simmons drove Lippe's car in real life, and during a retake, the blast screen failed to protect him, setting him on fire. Luckily, he survived. 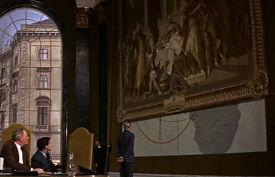 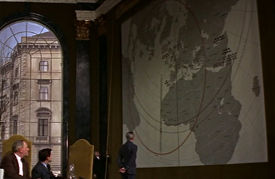 After SPECTRE has enacted its plan to steal a Vulcan plane equipped with two nuclear bombs, MI6 holds a meeting with every double-0 agent. In the beautiful Ken Adam set, the officials discuss the issues at hand. A man pulls a rope next to a large tapestry, and the tapestry slides up to reveal a gigantic map representing the full flying range of the Vulcan, at the time of its capture.

Small touches like this are what set the Bond films apart from their imitators. It's not just about the large explosive gadgets, the small details are just as important. The crew couldn't find a real tapestry big enough to fill the large space, and had to commission one to be made from scratch.


Tape Recorder in a Dictionary 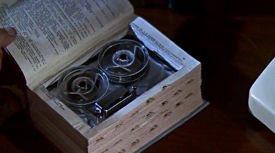 Bond has long had a mistrust of people entering his hotel suite while he's out. In Dr. No, he put a hair across his wardrobe door, and put talcum powder on his briefcase lock. Similarly, in Thunderball, Bond leaves behind a tape recorder with a highly sensitive microphone, hidden inside a dictionary on the phone table. He uses it to catch a henchmen who has snook into his room to set a trap.


Geiger Counter in a watch 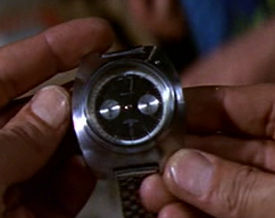 Q pops down to Nassau to deliver some gadgets to Bond. The first, is a watch that contains a sensitive Geiger counter. 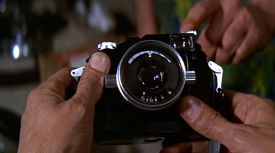 Q also gave Bond an underwater infrared camera that could be used to take pictures in the dark. Bond used it to photograph a secret compartment on the underneath of Emilio Largo's yacht. It also featured a Geiger counter, as MI6 was anxious to detect and recover some stolen nuclear bombs. 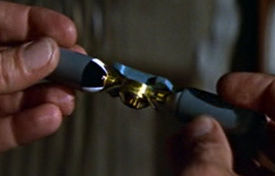 One of the less realistic gadgets of the film is the underwater breather (or re-breather, because it supposedly recycled air.) Q reckoned it would supply 4 minutes worth of air. This may seem plausible, until you consider that a full size scuba tank supplies only 40 minutes of air, and is about 100 times larger. Nevertheless, it was an interesting contraption, and added some fun to the film. 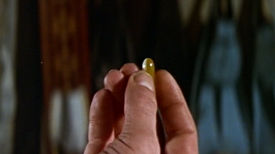 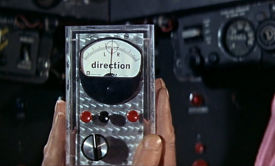 The last thing Q leaves Bond is a small pill that acts as a homing device. It was introduced with some classic Q-esque dialog:

Next: You Only Live Twice Gadgets »