The second anybody mentions the name Aston Martin, the first thought that comes to mind is the DB5 from Goldfinger. It was the first car to be equipped with gadgets, and took the idea to the limit. The producers also took the bold move of showing most of the gadgets up front, to heighten the audiences anticipation. These Aston Martin gadgets are some of the most memorable of the James Bond series. 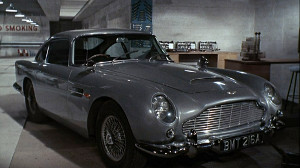 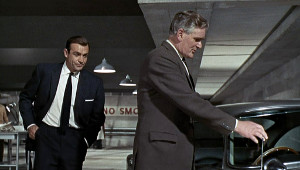 In Goldfinger, Bond is first shown walking through Q's lab in the basements of MI6. The producers choose to show off most of the gadgets upfront. After seeing a tear-gas emitting parking meter, a machine-gun proof jacket, and a grenade flask, Bond asks about his car.

The famous gadget laden DB5 was introduced 22 minutes into the film, leaving the audience a half hour of anticipation, until all the gadgets were put to use. 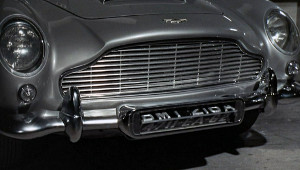 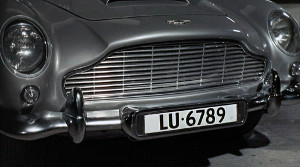 The Aston came complete with revolving number plates, which Q mentioned were valid in all countries. However, what he actually meant was all the countries Bond would travel through on his trip to Switzerland, to stake out Auric Goldfinger's headquarters.

The countries were as follows:

Bond started his trip in London, driving South-East to Dover, crossing the channel to Calais in France. He then drove, following Goldfinger, through Rouen, Orléans, by Bourge, and finally to Geneva in Switzerland. Having a local number plate at each point would attract less attention. 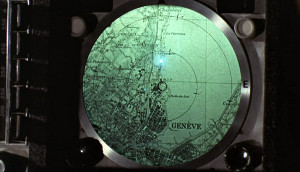 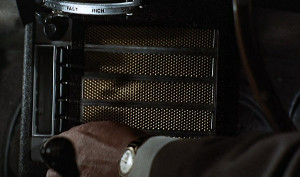 After winning a golf match, Bond plants a homing device in the boot of Goldfinger's Rolls Royce, and uses the reception dashboard to track the Rolls to Switzerland. The dashboard was quite ahead of its day, and was similar to a modern GPS mapping device.

The device, and its operation, was taken straight from the novel, in which Bond tailed Goldfinger in an Aston Martin DBIII. In the novel however, Bond had more trouble tracking Goldfinger, taking a wrong turn to Paris, and having to backtrack to Rouen. 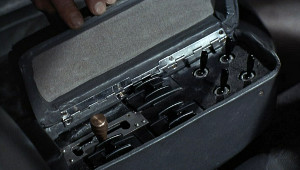 The drivers arm rest opens to reveal the DB5's defense mechanism controls (as Q describes them). From top left: 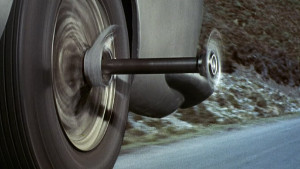 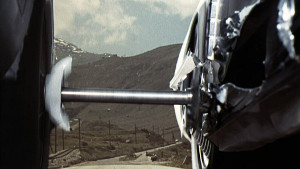 Bond is tailing Goldfinger across the Swiss Alps, when he is overtaken by a girl in a Fort Mustang convertible. He begins to chase her, but then goes down a gear and slows down, retorting "Discipline 007, discipline".

The beeps from his GPS dashboard get closer together, and Bond stops at the side of a road, not wanting to get too close to Goldfinger. At this point, Tilly Masterson, the girl in the Mustang attempts to shoot Goldfinger, but misses and almost hits Bond.

Bond spots her on the road a few minutes later, and uses the DB5's tire slashers to destroy her car, so that he can get some more information. It isn't clear which switch on the armrest is for the tire slashers, but it is presumably one on the second row. 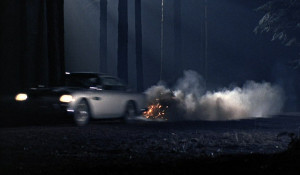 Bond hides in the hills above Auric Enterprises, and waits until dark. While there, he spots Tilly Masterson with a rifle, and grabs her, thinking she might be trying to kill him. In the struggle, her rifle barrel touches against a wire fence, alerting security.

Bond invites her into the Aston, and uses a smoke screen to confuse the security men. The trick works, and one of them crashes into a tree. 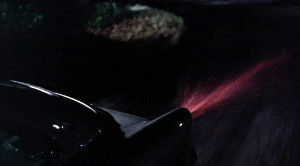 The smoke screen manages to rid Bond of one of his assailants, but another security car goes through the smoke undeterred. Bond engages his next gadget, the oil slick, to shake off his other tail. The spewing oil has a red sheik to it, from the rear lights on the DB5. The enemy car skids on the oil, and runs off the edge of a cliff, exploding in the process. 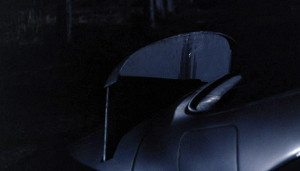 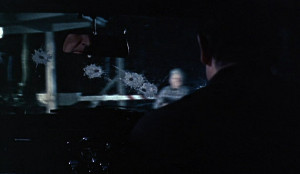 Having disabled two of the security cars, Bond approaches a fork in the road, and makes the wrong decision. He goes left, which leads to a cliff edge, and breaks just in time. As further security men approach, Bond has no chance to go back to the fork, so he raises the rear bullet proof screen to protect Tilly, and gets out to shoot them.

One point always mentioned regarding this, is that Q said the windscreen, side, and rear windows were all bullet proof. Then, why would Bond need an additional bullet proof bit of metal?

The answer lays in a later scene. Bond is trying to escape from the complex, and gets shot at by an old lady with a machine gun. The bullets begin to weaken the windscreen glass (see image on left), and Bond decides to swerve out of her path, to avoid further damage to the window. In short, although the rear window would withstand some damage, a solid iron plate would be more durable against constant fire. 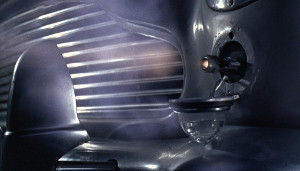 Nearing the end of Bond's chase through Auric Enterprises, he drives into another dead end, and is tricked by a mirror at the end of his path. Seeing his own headlights in the mirror, he thinks it is another car, and engages his front wing machine guns to shoot at them.

Also visible in the picture on the left are the front extending over-rider rams, which aimed to protect the in the case of a minor collision. 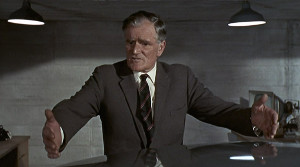 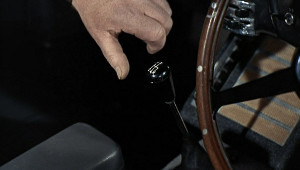 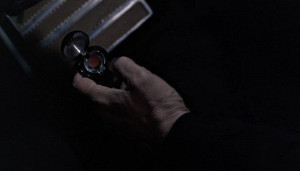 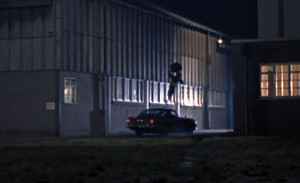 The ejector seat is one of the most remembered gadgets from the James Bond series, and definitely a fan favourite from Goldfinger. But it was only a quick scene, and not overly impressive by itself. The real key was the anticipation. The audience was shown early on, back in Q's lab, that the DB5 had an ejector seat, so everybody knew it was going to be used at some point.

Desmond Llewelyn had first appeared as Q in From Russia With Love, but he didn't have particularly much character. When he came back for Goldfinger, he initially made the Q character respectful of Bond. However, it was pointed out that Q should be somewhat annoyed at Bond for constantly destroying his cars and gadgets.

Goldfinger was where Q's character really came out, and the scene introducing the ejector seat is still considered to be one of Desmond's best scenes.