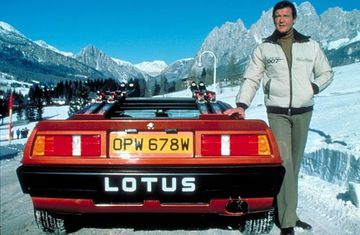 James Bond is known for driving exotic, expensive and stylish cars. From Dr. No through to Skyfall, cars have been an iconic part of the James Bond movies. Here is a selection of some of Bond's best cars, with no decade left untouched. 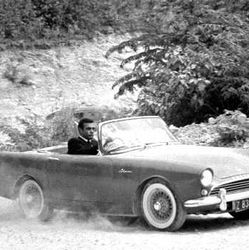 James Bond's first car was the modest, British made Sunbeam Alpine, in a light lake blue. Bond rented the convertible in Jamaica to drive to the mountain apartment of Miss Taro, the principal secretary of Jamaica, who doubled as a spy for villain Dr. No. Although starting out as a leisurely sunny drive, Bond is soon chased by The Three Blind Mice in a hearse. He avoids their tail with style, by driving under a crane that is blocking the road. The hearse is too tall to fit under, and ends up swerving off the mountain to its fiery demise.

We've included the Sunbeam at number 10, because of its understated modesty, the iconic chase, and the fact that it was James Bond's first car. The Alpine was supposedly borrowed from a local on the Island, to avoid the cost of importing their own. 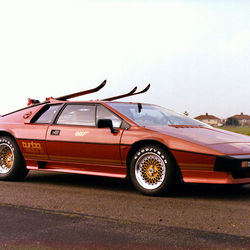 Lotus isn't the first car manufacturer most people would associate with James Bond, as only three of their models have appeared in the series. But, whenever Bond has gotten behind one of their wheels, the Lotus has been the highlight of the film's selection of vehicles.

Appearing in For Your Eyes Only, Bond drives the burgundy Espirit Turbo to a ski resort in the North of Italy. A similar model with a white paint job had appeared earlier in the film, but had exploded when its anti-theft system had been set off. The joke being that Q had had to rebuild the Lotus entirely from scratch. The iconic image of the beautiful car with Bond's skis on the roof puts the Lotus at number 9. 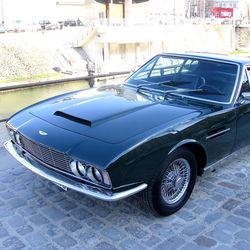 Introduced in 1967, the Aston Martin DBS series only lasted five years. However, the same design lived on with the Vantage, the V8, and the V8 Vantage until 1989. At 22 years, the iconic design was used for longer than the DB1-DB6 series designs.

George Lazenby, Sean Connery's temporary replacement, was introduced in On Her Majesty's Secret Service driving the DBS, in a scene very reminiscent of the opening minutes of The Italian Job, released earlier in the same year. Lazenby is driving along a winding Portugal road, his face hidden by shadows and cigarette smoke, in quite an artistic sequence. The Aston features prominently throughout the film, including in a chase through a car rally, a winter storm and the final moments where Bond's wife is shot through its windshield. 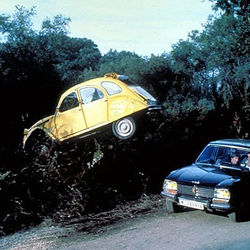 We just had to include the bright yellow Citroen 2CV, pictured left flying over the enemy car that was trying to chase them. It was a beat up, unreliable old banger, but the producers still managed to churn out a fast paced, light humoured chase sequence through a Spanish olive plantation. The actual car was fit with a more powerful engine so that it could keep ahead of the Peugeot 504s that were chasing it.

The car itself isn't too interesting, and certainly not something Bond would go out of his way to drive. But the chase has proved to be very popular, with the Corgi model car being one of their best sellers. Citroen even made a special 007 edition of the real car, with a large 007 logo and fake bullet hole stickers on. But in that case, I think the joke was on the customers! The 2CV probably had the cheapeast car insurance of any Bond car. 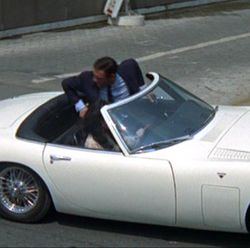 The Toyota 2000 GT has been called the first Japanese supercar, and has been praised as being extremely enjoyable to drive. It was therefore wholly suitable for 1967's You Only Live Twice, which was set in Japan, and driven by daring Bond girl Aki.

Just over 300 of the GTs were made, and they weren't convertibles. The soft-top version shown in You Only Live Twice was one of two produced specifically for the film. Even then, they weren't true convertibles, as they had no roofs, just the upholstery at the back to make it look like they did. It is rumoured that the special editions were made because Sean Connery was too tall to fit in the original.