Following his creation in 1953, James Bond featured in twelve very successful Ian Fleming novels prior to the release of Dr. No, the first motion picture in the Bond film franchise in 1962. So, while skilful production and casting have contributed enormously to the global success of the Bond movies, the ultimate appeal of 007 lies firmly in the edge-of-your-seat story lines.

In pitting his wits against megalomaniacs across every continent, Bond has on many occasions been close to a sticky end. Here we list our top ten memorable close shaves where our hero, but for some quick thinking and even quicker reflexes, could have been pushing up the daisies. 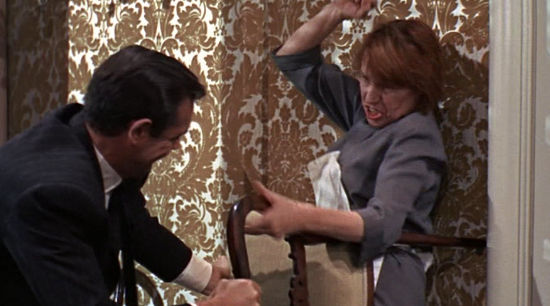 Having checked into a hotel in Venice, Bond and Tatiana Romanova are confronted by Rosa Klebb, an assassin dressed as a room maid. Aiming a pistol at Bond, the maid orders Romanova out of the room. Reaching inside Bond's jacket, she takes his Walther PPK and throws it on the floor out of reach. Realising she is going to shoot Bond, Romanova re-enters the room and disarms Klebb, but falls dazed to the floor during the struggle.

Bond goes for the gun, but the evil Klebb taps her right foot on the floor and out pops a poisoned toe spike; a rapier-like blade laced with a poison that will kill Bond with a single scratch. Klebb hobbles toward Bond. Kicking out with her spiked shoe she narrowly misses his legs. Bond takes a chair and pins the infuriated Klebb to the wall, all the time dodging her kicks as she becomes trapped against the wall. Romanova regains her senses, picks up the gun and fires a single shot. Rosa Klebb falls to the floor, dead, and Bond breaths an audible sigh of relief. 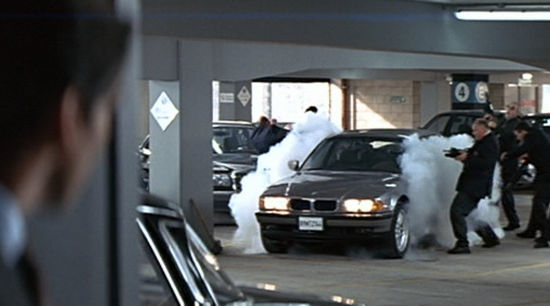 Having just killed the torturous Dr. Kaufman, Bond finds his BMW 750i surrounded by heavies. From behind a pillar, he takes out his mobile phone and blasts the mob with toxic gas from injectors beneath the car. Using the thumb wheel on the device, he draws the car forward and jumps through an open rear window onto the back seat. The heavies give chase, firing automatic weapons and armour-piercing rockets. Bond steers the car while lying down, safe from the hailstorm of flying bullets.

The BMW's open sunroof exposes a rack of missiles that Bond fires at a vehicle blocking his escape route. He then drops steel tacks causing multiple punctures on the pursuing Mercedes-Benz, but just as he thinks he's safe a missile shoots in through the windscreen and out through the rear, narrowly missing his head. After using the BMW's steel cable cutters to avoid decapitation, Bond leaps from the speeding car to a place of safety, leaving the chasing pack to follow the empty car as it plummets off the rooftop car park into the window of the AVIS Rent A Car office in the street below. 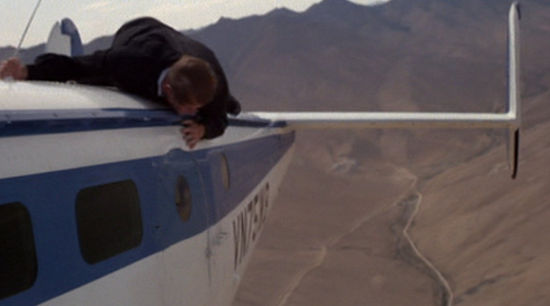 In making a run for it in a plane, Kamal Khan and his bodyguard Gobinda take Octopussy as hostage. Galloping down the runway behind them on a horse, Bond leaps on to the tail of the plane as it takes off. Crawling on to the roof of the fuselage he holds on to the antenna with one hand and peers inside the cabin. Realising Bond is on the roof, Khan puts the plane into a screaming nosedive, then climbs to altitude and turns acutely in an unsuccessful attempt to loosen Bond's grip.

As the plane levels Bond climbs on to the wing and pulls the wires from one of the engines, causing it to cut out. Khan orders Gobinda to kill Bond with his scabbard, but Gobinda is abruptly dispatched with a lash from the plane's antenna. Khan performs an emergency landing on a desolate dirt track but the momentum of the aircraft is too much for the braking system and it heads ominously toward a cliff. As the cliff edge approaches, Bond and Octopussy jump out together, almost falling to their death as the plane crashes into the rock face in a ball of flames. 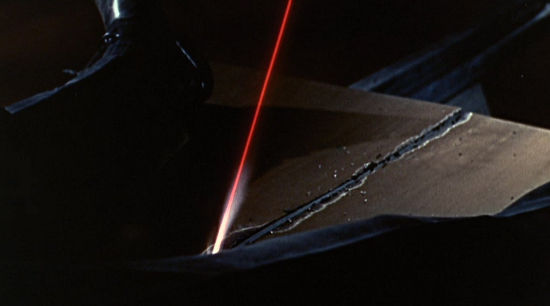 Bond awakes bound tightly to a solid gold table. Goldfinger enters the room and tells Bond of his new "more practical" toy. An industrial laser cutter points down at the table and with the flick of a switch a red laser beam begins to cut a neat line through the solid gold between Bond's legs. Content that Bond's fate is sealed, and sure he knows nothing important, Goldfinger turns to leave the room. The laser cutter draws closer and Bond begins to get edgy.

The powers of persuasion, on which Bond could so often rely, fall on deaf ears. Goldfinger is uninterested and the laser beam burns closer and closer as the gold peels from the table. Then, just as he about to leave the room, Bond, in desperation, mentions Operation Grand Slam. Goldfinger hesitates. The laser beam is just centimetres from Bond's groin and still tracking upward. Convinced that there is a chance that Bond knows too much, Goldfinger orders the laser to be switched off. But this is only a temporary stay of execution as our hero is then shot with a tranquillizer gun. 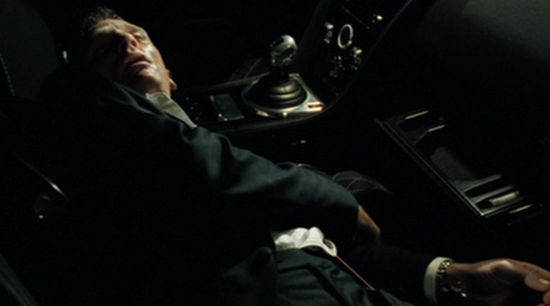 Bond's luck has taken a turn for the better as the waitress brings a cocktail to the poker table. He takes two large gulps as the cards are dealt. Then, staring at the glass he realizes he has been poisoned. Leaving the table he grabs a salt cellar and drinking glass from a dining table and drinks a strong saline mixture, vomiting in the bathroom. Disorientated and sweating profusely, Bond staggers outside to his Aston Martin where he sends an emergency alarm to his MI6 support team.

He goes into cardiac arrest and will be dead within two minutes unless he follows instructions carefully. He removes the defibrillator from the glove box, attaching the leads to his chest. After injecting antidote into his neck, he's told to press the defibrillator button. He presses, and presses, and presses. Something is wrong. Nothing happens. Bond sees the terminal that connects the CPR pads to the defibrillator hanging loose. It's too late. Bond passes out. His heartbeat is flat lining and only a timely intervention by Vesper Lynd can save Bond's life as she connects the loose wires and jumpstarts his heart again.