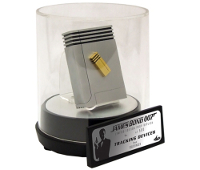 Factory Entertainment, who previously released a limited edition golden gun replica, have now produced 500 replicas of the homer tracking devices used in Goldfinger. The pieces cost $379 each and will be released for sale on October 16th.

Devised by Q, the two homers could be tracked on the GPS dashboard of Bond's Aston Martin DB5. Bond hid the large silver homer in Auric Goldfinger's Rolls Royce, and used it to track him on his journey to Switzerland. The smaller gold companion was hidden in the heel of Bond's shoe, so that he could be tracked by Felix Leiter at the CIA.

The original prop that was made for the film has since been lost, but the replica is based on original drawings and technical diagrams. Factory Entertainment also consulted the original crew members of Goldfinger, to make sure all the details are as accurate as possible.

To pre-order, or view more photos and details, see the product detail page.