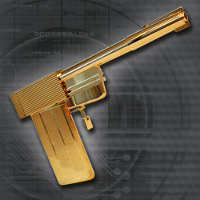 The online collectibles store Factory Entertainment has created two officially licensed limited edition replicas of the golden gun that appeared in The Man with the Golden Gun in 1974. The million dollar per shot pistol used by Francisco Scaramanga, has been recreated as a 1:1 scale exact replica.

There are two editions of the gun, the regular edition, and the Dual signature edition that includes a numbered plaque signed by both Christopher Lee, who played Scaramanga, and Roger Moore, who of course played James Bond. Both editions are plated with 18 carat gold, and can be dissembled into five parts, including the bullet.

The pieces cost $449 and $649 respectively. Pre-ordering is already open, and the guns are due to ship in September of this year. The official description of the guns components follows:

Also available from Factory Entertainment are a replica of Jaws teeth from Moonraker, and a replica of Solitaire's taro cards from Live and Let Die. For more information, visit the James Bond section of their website.