The complete list of all James Bond video games, from the humble beginnings in text adventures, through the ground breaking multiplayer in Goldeneye 007, all the way to 007 Legends. Learn about all the James Bond games in one place. 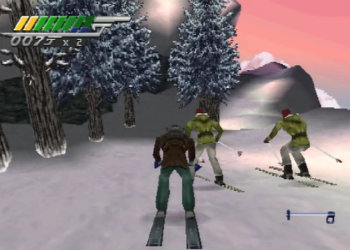 Tomorrow Never Dies was the first of 8 Bond games developed by Electronic Arts, and certainly one of the worst. Released for the Sony Playstation in 1999, the game threw out everything that had made Goldeneye 007 such a classic. Tomorrow Never Dies featured a third person perspective, no multiplayer whatsoever, outdated tank controls and lacklustre graphics. When walking anywhere near enemies, the targeting system would automatically lock-on without even a button press, resulting in overly simplistic one-button shooting. To its credit, the skiing section was fairly fun. 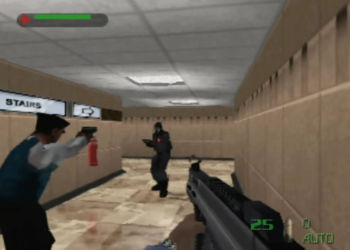 Following the success of Goldeneye 007, developer Rare declined the opportunity to make another Bond game, instead choosing to develop their own IP with the spiritual successor Perfect Dark. Electronic Arts took over and released their own sequel for the N64, The World is Not Enough in 2000. Ignoring their dismal first attempt with Tomorrow Never Dies, EA instead cloned the gameplay style of Goldeneye and produced a decent, if not innovative, game that met with good reviews. EA also released a Playstation game with the same title, but it was made by another developer and was poorly received for its bad gameplay and lack of multiplayer. 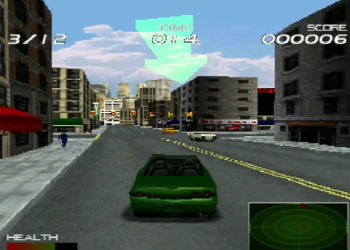 007 Racing was released in the same month as the awful Playstation version of The World is Not Enough, and is undeniably Electronic Art's worst James Bond game. Boring graphics, atrocious level design, awkward gameplay and mediocre sound leave nothing left to like about this game. The gameplay has you driving through checkpoints and shooting missiles and machine guns at enemy vehicles. But the sloppy, unresponsive controls quickly remove any fun that might've been had. It proved yet again that James Bond was better on Nintendo. 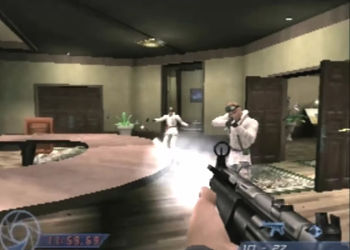 Agent Under Fire was the first James Bond game on the sixth-generation consoles and was released first on Playstation 2, with GameCube and Xbox ports released the following March. Since Bond games were coming out at a faster pace than the films, Agent Under Fire necessitated an original story, and managed to pull it off fairly well. The gameplay returned to the first person perspective, and combined fun shooting with new gadgets including a grappling hook and a hacking device. Driving missions added some variety, and were a huge leap up from the terrible mechanics in 007 Racing. Overall, Agent Under Fire marked the beginning of a stream of good Bond games from EA. 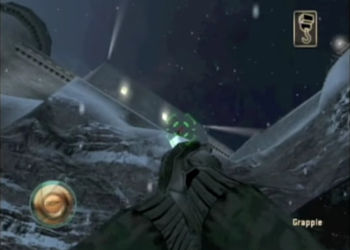 Nightfire, released in 2002, was the sequel to Agent Under Fire that improved upon its predecessor in almost every way. To begin with, it managed to capture the authentic feeling of a Bond film, opening with a gun barrel sequence, a playable action packed pre-title sequence and a girl-filled title sequence complete with an original song. The level design was excellent, with many missions allowing for several unique approaches, giving the game a more open-world feeling. Top that with stellar driving missions and you're left with a classic Bond game. 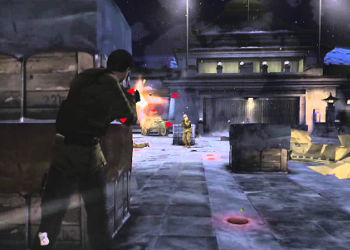 Everything or Nothing is the highest rated of all the EA James Bond games, and arguably one of the most enjoyable. It reverted to a third-person perspective and introduced tight cover-and-shoot mechanics, wall repelling action and some extremely fun gadget-filled driving missions, with cars, motorbikes and helicopters. In fact, the game placed a greater emphasis on driving missions than any Bond game before it, and the use of the Need for Speed engine ensured tight controls and mechanics. Everything or Nothing was also the first game to include non-archived voice acting from the cast of the Bond films, including Richard Kiel as Jaws. 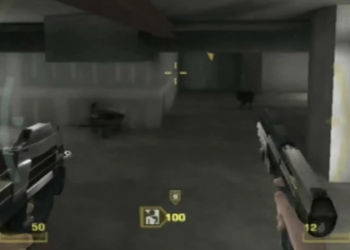 Goldeneye: Rogue Agent already starts out on the wrong foot by not featuring James Bond, and by having no relation to the Goldeneye film or game. To make matters worse, the plot revolves around an ex-MI6 agent who defects to work for Goldfinger, and ends up killing Dr. No and Oddjob. Yes, Oddjob, Goldfinger's extremely loyal henchman and bodyguard. It's a mishmash of characters from unrelated films, in roles that make no sense within the canon of the Bond series. This could've been forgiven if it weren't for the bad gameplay. Repetitive shooting of enemies that all look the same in generic and boring environments. This is not a Bond game worth going back to. 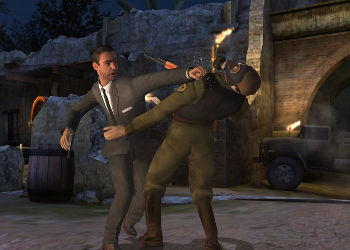 007: From Russia with Love was the last Bond game published by Electronic Arts, and although not as good as Everything or Nothing, it was a high note to end on. From Russia with Love featured the likeness and voice acting of Sean Connery, and recreated many sets and locations used in the 1963 film. The most interesting aspect of the game is seeing these familiar sets, and exploring the off-camera areas you were never shown in the film. While these environments are beautiful, the level design falls apart when compared to Everything or Nothing, leaving gameplay that isn't quite as fun. But it remains an enjoyable experience, and something worth going back to for fans of the Connery films. 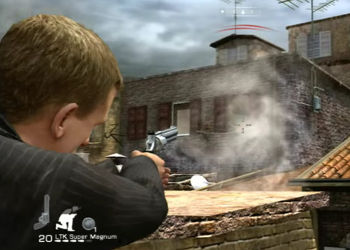 Quantum of Solace was the first James Bond game from Activision, ending EA's eight game run. It was powered by the Call of Duty 4 engine, and was the first Bond game of the PS3/Wii/360 generation. The story is based on the films Casino Royale and Quantum of Solace, and follows their plots quite closely, with some additions. While the shooting is first class, it's the first Bond game in years to have no driving levels, which really hurts the variety of the gameplay. The music and voice acting are excellent, with the cast including Daniel Craig and Judi Dench. Overall, Quantum of Solace is a high quality, if somewhat average, first person shooter. 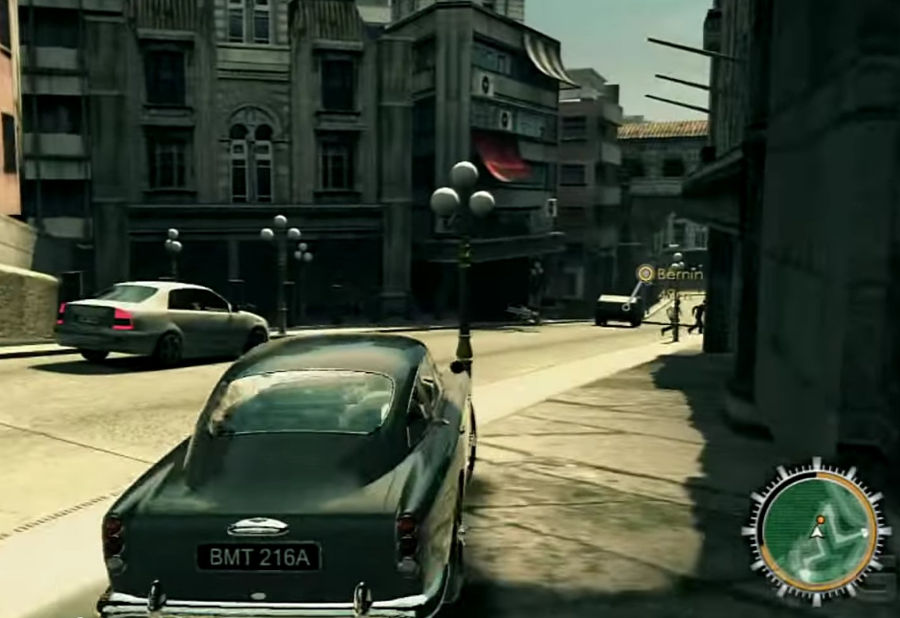 Blood Stone is the second Bond game from Activision that greatly expands upon the gameplay variety of their previous effort. It adds melee attacks allowing for a more stealthy gameplay, as well as excellent car and boat driving missions that become a highlight of the game. Its downfall is that, after an intense pre-title sequence, the first half of the game gets off to a slow start with too many empty hallways and a general lack of fast-pace action. The second half improves on this greatly, but since the story mode is only 5-6 hours, the game feels lacking overall. The studio behind Blood Stone, Bizarre Creations, was shut down following its release. 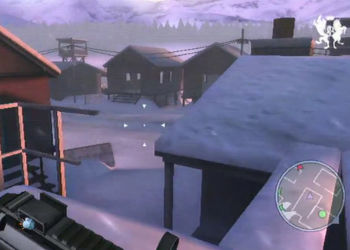 Goldeneye 007, a remake of the Nintendo 64 title, was released on Wii on the same day as Blood Stone. It featured motion controlled shooting with the Wiimote and movement with the Nunchuck. Don't let the term 'remake' confuse you, this game is a new game from the ground up, that is heavily based on the original. Like the original, the single player experience is excellent, but multiplayer death matches are where the lasting value comes about. Although supporting online multiplayer, Goldeneye 007 shines best in local split-screen shooting bliss, and is one of the best multiplayer titles on the Wii. A remastered version, Goldeneye 007: Reloaded, was released on PS3 and 360 a year later, although it wasn't as well received. 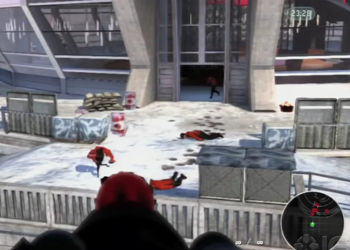 007 Legends is the lowest rated James Bond game of all time, with aggregate ratings ranging from 16-45% depending on platform. Eurocom, the studio behind 007 Legends, went bankrupt following its release. The poor reception and sales also lost Activision the Bond license. The premise is that Daniel Craig's Bond has flashbacks to missions from five Bond films, including Goldfinger and On Her Majesty's Secret Service, that are retold in a modern day setting. The gunplay is repetitive and dull, the boss battles are just quick-time events, and the stealth mechanics are outdated and not fun. On top of this, none of the Bond cast came back for voice acting. The concept just doesn't work, and the butchering of classic Bond scenes leaves little left for even a Bond fan to enjoy.