The Centenary of Cubby Broccoli 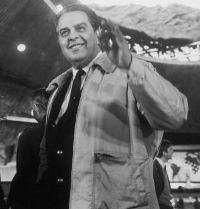 Last Sunday, 5th April, was Albert R. 'Cubby' Broccoli's centenary, that is, the 100th year since his birth. Cubby was the key producer of the Bond films from their beginnings in the early 1960's, until his death in 1996. He is considered to be the leading force behind the entire series and has become a legend among fans.

In the early 1960's, Cubby had broken up with his film partner Irving Allen, and was looking for a new project. He heard from a friend that Harry Saltzman had the rights, and was having trouble getting the money together, with his 6 month hold on the novels about to run out. Cubby went to see him, attempting to buy the rights, but Harry didn't want to give them up, so they instead formed a partnership, and the legend began.

From his past film experience, Cubby knew that exotic locations, fast paced action, and a solid production team was the key to success. He gathered several people from prior projects, like director Terence Young, and begun work on Dr. No.

Cubby was a hands on producer. Unlike many others, who would 'produce' from a cozy office, Cubby was always on set, regardless of any weather conditions. He even cooked for the crew on occasion, and never treated the little guys with anything but his full respect.

The James Bond Crew changed little over the years, and became almost like a family. This is surely because of Cubby, who's warm heart and great kindness made the films more than just a job for the crews.

The success of the series is, of course, attributed to the entire cast and crews, but Cubby was a key driving force behind it, and his legend will live on as the series is passed down through the Broccoli family.