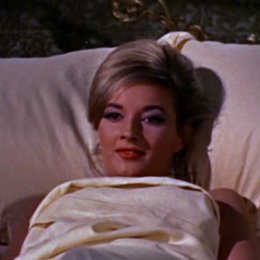 Tatiana Romanova was the Corporal of State Security in the Soviet Union. She was recruited by Rosa Klebb to lure James Bond into Istanbul so that they could steal the Spektor decoding machine and escape together. The real plan was for henchman Red Grant to kill them before they got away, stealing the Spektor for themselves, with the blame being on Bond.

The Character in the Movies

The character of Tatiana Romanova was the same as that in the novel. The plot of the film differed slightly, but this affected other characters, and not Tatiana. The differences of other characters are noted in their respective pages, linked to throughout this page.

Tatiana Romanova was the Corporal of State Security in the Soviet Union. She lived in a flat with three rooms on the eighth floor of the woman's barracks, in the State Security Department, also known as the Sadovaya-Chernograzsby Ulitza.

She had to rise through the ranks of Sergeant, Lieutenant, Captain, Major, and Lieutenant Colonel before advancing to the prestigious eighth floor. She earned 1200 roubles a month, free accommodation, and heavily discounted food and clothes at "Closed Shops". She also received two tickets to ballets and operas per month, and got two weeks paid holiday a year.

Her luxurious benefits came at a price though. She was confined to the society of MGB men and woman, and wasn't allowed to leave the area. The MGB was the Ministry for State Security, a direct predecessor of the KGB. Tatiana had attended ballet school when she was younger, and had got into the MGB after she grew an inch over regulation height, and was forced to quit.

She was well trained, having attended Security Officers School for several years, and had worked in Central Index for six years to earn her promotions.

One day out of the blue, Tatiana was called into Rosa Klebb's office. Klebb was the Head of Operations for SMERSH, the counter intelligence department of the Soviet Union. Tatiana assumed that she had displeased SMERSH and was drastically frightened because of Klebb's reputation for torture.

Her fright soon fell when Klebb promoted her to Captain of State Security, forcing her into a top secret mission of national importance. Tatiana was questioned about her past boyfriends, and was told that her mission was to fall in love with a British agent, to give false information to the enemy.

As Klebb explained the mission, Tatiana began to believe what she was saying, and truly thought she was working for the good of her motherland. Klebb had initially been quite strict and mean, to ensure Tatiana's loyalty and respect. Seeing she had her uneasy, Klebb started to act nicely.

She offered Tatiana chocolates and champagne, and dimmed the lights, sitting close to her on the sofa. This freaked Tatiana out, and she ran from the room crying, still scared of what Klebb would do to her if she disobeyed an order.

Klebb described Tatiana as "Prudish and sexually unawakened" and dismissed the matter, knowing that Tatiana would obey her every command.

Tatiana met Kerim Bey, the Head of Station T, Turkey, on a boat trip and told him that she loved James Bond, and wanted to leave the restrictive realm of the MGB. She said she had been granted a transfer to Istanbul, Turkey, and wanted his help.

She told Kerim that if James Bond came to Istanbul and helped her defect to England, she would bring him the Spektor cipher machine. Kerim was suspicious of her, but picked apart the details until he was satisfied.

Tatiana hadn't made contact with Kerim since meeting him on the boat, and was instructed by Klebb to meet Bond herself. She took a room out at the Kristal Palas hotel, two floors above Bond.

The next night, she snook down to his floor and went into his room. She took all her clothes off and hid them under the bed, except for a black velvet ribbon around her neck. Bond came back from the bathroom, also naked, and Tatiana was shy and upset by his presence.

But she knew she must drop her unease for the mission, and tried to break the ice, comparing Bond to an American film star. She had meant to compliment him, but Bond instead replied "For God's Sake! That's the worst insult you can pay a man."

As the process went on, she became pleased that she could spend time with him, as she would have been punished for doing it outside of a mission. She began to fall in love with him, her mission becoming reality. She was upset when he mentioned the Spektor, wondering what Bond really cared about. But she realized she had a job to do, and forgot about it.

Tatiana planned to take her usual route to the office at the Russian Consulate, steal the Spektor (which she worked with daily), and then take a taxi to the Sirkeci train station at half-past eight, where the Orient Express would depart.

She planned to take the Istanbul to Paris route, which would cover 1460 miles in a 4 day, 5 night trip. She was told that she must convince Bond to take a train, because she would be arrested if they flew out of the country.

When the day came, the resident director handed Tatiana a Spektor, telling her not to let it out of her sight during the trip, as she would be discarded and tossed away if she did. She arrived at the station just on time, as the train was about to set off. She entered at the rear and ran up near the front of the train to get Bond.

Kerim Bey also boarded the train, and alerted Bond that 3 MGB men came aboard at the last minute. Bond questioned Tatiana, who claimed to know nothing, and told Bond that she was just scared that he would forget about her when they got to England.

She knew that the men were just there to guard her, but she decided not to tell Bond anything until they got to England. Later on, Kerim was brutally murdered, and back in their compartment Bond begun violently questioning her because of the death of his friend.

She still didn't tell him the full truth, and his outrage made her begin to question Klebb's orders, wondering if she was really doing it for the good of the motherland. She decided that she would tell him everything she knew in London, and ask him to hide her from SMERSH.

Bond and Tatiana stopped briefly at one of Kerim's sons flats, to alert them of the bad news. When they got back on the train, they were met by Red Grant, who claimed to be from MI6. She distrusted him immensely, and rightly so.

Grant drugged Tatiana's drink to make her sleep, and unveiled the true plan, that Klebb was really just out to steal the Spektor for themselves, killing Bond and leaving the blame on him. The plan failed though, and Red Grant was killed.

Bond forcibly woke her up, and escaped with her, not telling her what had happened. He took her to a room at the embassy and left her there, never to return. 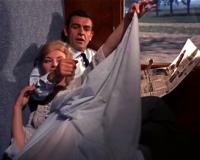