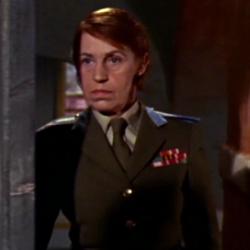 Rosa Klebb was the Head of Operations for SMERSH, however in the movie she defected to SPECTRE. She led a mission to steal a Lektor decoding machine and humiliate the British Secret Service. She choose Tatiana Romanova to lead Bond into Istanbul and choose Red Grant to take the Lektor and kill Bond. Grant failed and Klebb was killed when she tried to take her revenge on Bond.

Rosa Klebb was the Head of Operations for SMERSH, before defecting and going to work for SPECTRE. She attended a meeting with Blofeld and the director of planning, Kronsteen, and it is revealed that she is called "No.3". Kronsteen briefed them on the mission, saying that they would obtain a Lektor decoding machine from the Russians with the inadvertent assistance of a Russian girl, and the British Secret Service.

He was sure that MI6 would send James Bond, so SPECTRE would also be able to take revenge for the killing of Dr. No. Klebb was given the responsibility of choosing the girl as well as the henchman to kill James Bond. She selected Red Grant for the mission and visited him at SPECTRE Island, punching him in the stomach with a knuckle duster to test his strength. Grant barely flinched and Klebb left, telling him to report to her in Istanbul in 24 hours.

Klebb then went back to Istanbul and met Tatiana Romanova, who she had selected to lure Bond to the country. She told Tatiana that she had been selected for a mission to give false information to the enemy, not telling her the real plan. She also said that she would be shot if she talked, and that she wouldn't leave the room alive if she refused to obey her orders. Klebb checked her out, and asked about her prior lovers, to see if she would be good enough for the assignment. There was a hinted overtone of lesbianism in the way Klebb handled the situation, but it wasn't taken any further.

Grant tailed Tatiana and Bond around Istanbul, with Klebb sometimes assisting him. In the honeymoon suite, Klebb was behind a two-way mirror, filming them both, to use as part of the plan later on. When Grant failed the mission, getting killed by Bond, Klebb and Kronsteen reported to Blofeld. Blofeld said that SPECTRE doesn't tolerate failure, and called in his agent, Morenzy. Morenzy flipped a poison tipped knife out of his shoe and killed Kronsteen, although making it look like he was going to kill Klebb. Klebb was given one last chance to get the Lektor and kill Bond.

Klebb disguised as a maid

She found Bond's hotel and entered his room dressed as a maid. She dusted things, waiting for Bond to leave the room, and then took his suitcase and the Lektor. Bond told her to leave the Lektor so she took out a gun and gave the Lektor to Tatiana. Tatiana, who had truly fallen in love with Bond, burst back in and knocked the gun out of Klebb's hands. Klebb flipped a poisoned knife out of her shoe, and tried to kill Bond. While they were struggling, Tatiana picked up Klebb's gun, and shot her, killing her with the first bullet.

Rosa Klebb was one of our Top 10 Bond Villains »

Rosa Klebb had been the mistress of Andreas Nin during the civil war in 1936. She had worked as a double agent for POUM, doing work for both the OGPU (secret police) in Moscow, and the Communist Intelligence in Spain. She got orders from Moscow to kill Andreas Nin, and from then on, she had slowly risen higher and higher, gaining more and more power. After the death of Lavrentiy Beria in 1953, Rosa Klebb rose to the position of Head of Operations for SMERSH (Otdyel II - Operations and Executions).

Klebb had been present at every torture session since she had became the Head of Operations. She would sit inches away from her victim on a small wooden stool, telling the torturer to use certain methods (in codes like "No86"). Then she would act nice, saying the pain could go away if they told her their secrets. She acted as a mother to a pained child.

Colonel Rosa Klebb was summoned to a meeting with the Head of SMERSH, General G, and the Head of Planning, Kronsteen. They discussed a plan to humiliate the British Secret Service by using a girl to lead James Bond to Turkey, giving him a Spektor decoding machine. They would then take the machine and kill him, getting revenge for the death of SMERSH agents Le Chiffre and Mr Big.

Klebb choose a suitable Russian girl, Tatiana Romanova for the mission. She called for Tatiana and craftily told her a plan to give false information to the enemy, missing out all the details of the real mission. Rosa asked questions about Tatiana's past lovers, planning to take them and their children as hostages if she stepped out of line.

After forcing Tatiana to co-operate, Klebb decided she had gone a little too far, and told Tatiana that they would drink together. She reentered the room dressed in a semi-transparent orange gown with pink underwear, pink satin slippers and lots of makeup. Tatiana thought she looked like the oldest and ugliest whore in the world, but through fear, still drank with her.

Klebb later called a meeting with Kronsteen and Red Grant, who she had hand-picked to kill James Bond on his way out of the country. She tested his strength with a brass knuckle duster, to excellent results. She briefed him on his task, and told him to meet with her afterwards at a designated hotel.

As it turned out, Red Grant failed his mission, and James Bond came to the Ritz hotel to find Rosa Klebb. He knocked on the door of room 204, and went in, only to see an old woman knitting. He told Klebb to give the game up, but she responded as if she was just an innocent old lady knitting. Bond thought for a second that he may have got the wrong room, or that the meeting had been cancelled. The women was actually Rosa Klebb in disguise, and she picked up a trick phone and shot at Bond.

Bond however, had noticed her nicotine stained moustache, when the room was empty of ashtrays, and had also noted that the call bell had no wires leading from it. He followed his instincts and leapt out of the way just in time. Klebb wasted no time, and dived at him with her poison tipped knitting needles. Rene Mathis and his backup burst into the room to help Bond. Klebb flipped out a knife embedded in her shoe, but Mathis managed to stuff her into a laundry basket. While Bond collapsed on the floor, Rosa Klebb was taken away to her death.