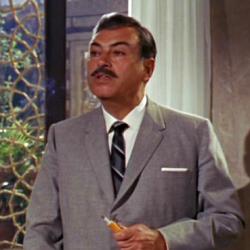 Darko Kerim Bey was the Head of Station T, Turkey and was one of the best men MI6 had anywhere according to M. He helped Bond in a mission to escape from Istanbul with Tatiana and a Lektor decoding machine, eventually getting killed by SPECTRE Operative Red Grant.

Kerim Bey, played by Pedro Armendariz, was the Head of Station T, Turkey. A girl named Tatiana Romanova had contacted him, saying that she wanted to defect to England. She had apparently seen a file photo of James Bond, and had taken a fancy to him. She said that she would hand over a Lektor decoding machine to Bond if he would go to Istanbul and take her and the machine back to England. 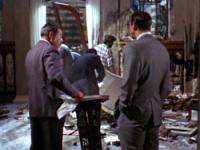 Kerim contacted M, who sent Bond out to meet him in Istanbul. Kerim sent a chauffeur to meet Bond at the airport, taking him back to Kerim's office to discuss the mission. Kerim said he smelt that something was fishy and that he didn't believe the girl. Bond went to rest at his hotel, and Kerim went to work at his desk. One of his 'girls' enticed him over to the sofa, and he narrowly missed an explosion caused by a limpet mine on the wall outside.

Kerim decided to spy on the Russians to try and find out if any of his old enemies were back in Istanbul. He led Bond through a hidden door and down some steps into an underground reservoir that had been built by the Emperor Constantine around 350AD. They took a small boat down to a tunnel and walked through into a small cavity beneath the Russian Consulate building. Kerim had received a periscope from the British Navy, and had closed the Consulate to install it, claiming that the traffic was shaking the foundations. He spied on a meeting and discovered that an old enemy named Krilencu was back!

Kerim Bey at the Gypsy Camp

Kerim decided to visit his friend Vavra to get some information. He went to Vavra's gypsy camp with Bond, but the evening didn't turn out as he had planned. Two girls were in love with the same man and were to fight to the death. They were allowed to stay for the fight, and were given food and raki. The two girls had nearly killed each other when Krilencu and his men attacked the camp, injuring Kerim and nearly killing him. Kerim decided to take immediate revenge, and he took Bond to Krilencu's street.

His plan was to get his sons to dress up as policemen and ring the doorbell, causing Krilencu to escape out of his trapdoor around the back. Kerim was ready with a sniper rifle, and he shot him dead, paying off many longstanding debts. Kerim then assisted Bond in stealing the Lektor, by setting off a bomb under the Russian Consulate. He escaped undetected with Bond and Tatiana, and boarded the Orient Express train. Kerim planned their escape back to England and took captive a Russian security man who had boarded the train to spy on them. He was then killed by Red Grant, who made it look like Kerim and the security man had killed each other

Darko Kerim Bey was the Head of Station T, Turkey and was one of the best men MI6 had anywhere according to M. He was a cheerful, clever and resourceful man who's life came to an end when he was stabbed to death in cold blood by a SMERSH operative.

Kerim smoked Diplomates in a long, ivory, nicotine stained cigarette holder. Dimplomates were very hard to come by, as most of them were given to the Ministries and Embassies. Kerim got many however, and he gave generously to his close friends.

Darko Kerim Bey was born in Trebizond, in north-eastern Turkey. His mother was an English governess and his father was a Turkish fisherman, famous for catching sword-fish. He was a ladies man, and so he had a large family with 15 children. The children lived a gypsy life-style and constantly argued. They lived almost on top of each other in a small, old ruin of a house. His father was strict and beat the kids if they were bad, to keep the family together.

When Kerim was 20, he got a boat of his own and made his money fishing, following in his father's footsteps. His father knew an Englishman who he sold information to, and Kerim went to work for him. The man turned out to be the Head of Station T, and Kerim took over his position when he died. Before he got the position, Kerim had infiltrated a traveling circus, working as a strongman and wrestler. He had spied on the Russians, pretending he didn't know the language. M had set him up with a spice business, which became a successful cover, and coincidentally the leading spice merchant in Turkey.

Kerim's office, located at the back of his Spice Factory alongside a river, contains:

His office was rebuilt after the wall was limpet-mined, and an Oriental Tapestry was hung to cover the damage.

All the core members of Kerim's staff are either his sons or his uncles. He believes that blood is the best security.

Kerim's driver in the movie

Stefan Trempo was one of Kerim's sons, who went to meet him at Belgrade Station. Bond met him and gave him the bad news, that his father had been killed. He drove Bond and Tatiana to his flat, leaving them to have a bath and eat. He had gone to contact Istanbul to tell them that Kerim was dead, so that they could set off the bomb underneath the Russian Consulate. He went back to his apartment and drove Bond and Tatiana back to the station.

His Mission with Bond

It all started when Kerim received an anonymous message telling him to get on the 8pm ferry streamer from Galata Bridge to the mouth of the Bosphorus river and back. He met with Tatiana Romanova on the ferry, and she told him that she wanted to escape to England with Bond, and that she would give him a Spektor decoding machine. Kerim forwarded the information to M, who sent Bond on his way to Turkey.

Kerim sent a car to meet Bond at the airport, and they met in a back office in Kerim's spice factory. Kerim told Bond that he had being working at his desk, and had gone to relax on the couch with a Romanian girl when a limpet mine went off on the wall outside. He couldn't understand the sudden breach of peace between him and the Russian's. He discussed the events of the day, and Bond's mission, saying that he was unsure about the whole Tatiana situation. If the Spektor were not at stake, he would have told Bond to go home. They tore apart every shred of evidence but got nowhere, so they decided to let the plot unfold.

Kerim organized the getaway in advance, booking two seats on every outgoing plane for the following two weeks. He choose the name of David and Caroline Somerset (His mother had come from Somerset) for passports, cleverly choosing the unambiguous "Company Director" as the profession. Kerim dropped Bond of at his hotel and arranged to pick him up again for lunch at the Spice Bazaar.

Kerim ate a large flat hamburger of finely minced raw meat laced with peppers, chives and bound together with egg yolk. He had developed the habit of eating raw meat when he had trained to become a strongman several years earlier. They discussed the matters further and Kerim decided that they should go and spy on the Russians.

They met at Kerim's office and dressed in blue workmen's overalls. Kerim slid a bookshelf aside that revealed a door that led to a reservoir. They walked through the tunnels for about 20 minutes, with a scenery of millions of red eyes from the rats. Kerim had found out about the reservoir and dug an extra tunnel to the underneath of the Russian Consulate building. He had then shut the building down for an "emergency safety survey" and installed a periscope, which had been a gift from the Turkish Navy. They witnessed a meeting, unfortunately without sound, and saw Tatiana enter the room with a memo.

They went back to Kerim's office and discussed the events of the day. Kerim insisted that Bond didn't go back to the hotel and be a slave to Tatiana's convenience. He couldn't make it too easy for her to find him. Kerim picked Bond up and took him for dinner to a gypsy restaurant owned by his friend Vavra. One of the Russian cars tailed them on the way, but Kerim didn't care if they saw him eating out with a friend. For journeys of a higher importance, Kerim would put dummies in the car and make the Russians follow the decoy for hours.

They arrived to find that the restaurant was closed. Two girls were fighting over one of Vavra's sons, and they were to fight to the death. Being an old friend of the family, Kerim was invited to watch the fight and have supper in the orchard at the back. The two girls fought, and had almost killed each other when they were interrupted by a huge explosion that blew a hole in the wall.

The Russians were attacking them, with orders to kill Kerim, Vavra and as many of his men as possible. Bond saved Kerim's life many times and they managed to fight off the Russians. Kerim decided to take immediate revenge and kill the Russian's leader Krilencu, who he discovered had also being behind the attack on his office.

Kerim knew that Krilencu had a secret trapdoor that led through a billboard outside of his house. He sent two of his sons, dressed as policemen, to ring Krilencu's doorbell. Kerim waited outside, and shot Krilencu with a sniper rifle as he came out of the trapdoor.

Tatiana caught up with Bond, and Kerim joined them on there escape on the Orient Express, which Tatiana had insisted on taking. Kerim tipped off the conductor and discovered that there was 3 MGB agents on the train. He pulled a trick he had used as a kid to get a free ride, waiting until one of them was in the bathroom, then holding the door shut and pretending to be the ticket collector, asking the man to slide his ticket under the door.

Midway through the journey, the conductor came in a panic to get Bond. Kerim had been stabbed to death by the third MGB agent. He had entered Kerim's room and they had killed each other, so it seemed.