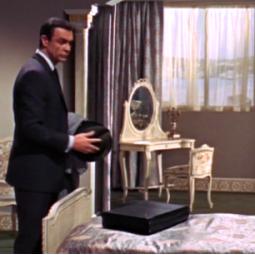 The Kristal Palas was a shabby and dirty hotel that Bond stayed in while in Istanbul, Turkey. Although the room was horrible, it had a magnificent view of an exquisite waterfront and Bond loved the atmosphere of the hotel. He was later upgraded to the honeymoon suite, the best room in the hotel.

The Kristal Palas in the novel FRWL

Having arrived in Istanbul, Turkey, James Bond was in need of a place to stay. Amused by the name, he had checked into a dingy little room at the Kristal Palas hotel. He had decided against the large posh hotels and had settled for a more continental, old fashioned place.

The Kristal Palas had overly casually dressed concierge's and housed many mosquitoes. The lobby consisted of rotting plants with brown palms, in dull copper pots, with walls and flooring to match. An old rope and gravity lift took Bond up to the third floor to his room. In the bathroom, the cold water was muddy and brown, and the hot tap didn't work, instead pushing out a centipede.

Despite the shabby appearance of the hotel, Bond's room had heavy red plush curtains with an iron balustrade giving way to a magnificent view of the golden horn waters, the barrier between Europe and Asia. Although the quality of the place didn't match any of the more fancy hotels in Istanbul, Bond preferred the atmosphere of the small 'Palas'. He got a great nights sleep and awoke to an exquisite view and an even better breakfast.

Before Bond got back the next day, Kerim Bey, the head of Station T, Turkey, had contacted the Kristal Palas, and Bond was moved to a more "adequate" room, which in reality was the best room in the hotel, the Honeymoon Suite. Although Kerim believed that the Palas was little better than a disorderly house, he knew the staff, and easily got Bond the better room.

When Bond arrived back, the plumbing was being fixed in his old room, and he was showed to Room No. 12, the honeymoon suite. It was on the first floor, and had a large bolt across the door. The suite was in a pink and grey style, with double doors leading to a large balcony. It had a ornate ceiling with a delicate chandelier, and was furnished with a King-size bed and fine Bokhara rugs on a parquet floor. There was a large gold-framed mirror on the wall behind the bed, and the suite came with a chest of draws, a dressing table and a large ensuite bathroom.

Like in the movie, the mirror was in fact a two way mirror, with a small cabinet behind it, fitted with a video camera. Although he was being spied on, he was treated as a distinguished guest, and was served thick, deep yellow yogurt, ripe green figs and freshly ground Turkish coffee for breakfast.

The Kristal Palas in the Movie

In From Russia with Love (released in 1963), Bond lands in Istanbul and checks into his hotel. Although it isn't named, it is very close to the hotel described in the novel. As Bond enters his room, he discovers that the phone has been tapped and that the room is wired for sound, so he requests another room on the basis of the bed being too small. They assign him the honeymoon suite, saying it is the only thing available.

Bond was assigned to the honeymoon suite because of the two way mirror above the bed. There was a room behind it, fitted with a video camera, and when Bond found Tatiana Romanova in his bed, Rosa Klebb recorded the action, planning to use the film as evidence that Bond was being blackmailed.