Goldeneye 007 to be Remade for the Wii 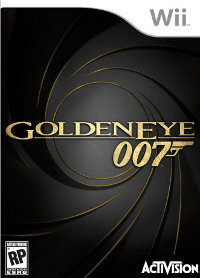 Everybody's favourite first person shooter for the Nintendo 64, Goldeneye 007, is going to be remade as a Wii exclusive title. Originally released in 1997, Goldeneye's revolutionary gameplay, split screen multiplayer deathmatch, and great control system became an instant hit. It went on to become the 3rd best selling game for the N64, with over 8 million copies.

The remake will see Daniel Craig replacing Pierce Brosnan, and a modified story by Bruce Feirstein, who wrote the screenplay for the original Goldeneye film. Bruce also scripted Tomorrow Never Dies, The World is Not Enough, and the games Everything or Nothing and From Russia With Love, so the plot will be top notch.

Unfortunately the original developer, Rare, won't be involved in the remake. It will however be handled by the British game studios Eurocom, who made James Bond Jr. for the NES and SNES, The World is Not Enough for the N64, and 007: Nightfire for the PS2 and xbox.

From the press release:

GoldenEye 007 features an unprecedented lineup of four-player split-screen MP options that encourage social gaming, including 40 total characters, 8 classic Bond characters, 5 maps, 3 standard modes and 16 special modifiers that allow gamers to create hundreds of game combinations. GoldenEye 007 also features online multiplayer for up to 8 players designed for seasoned FPS online gamers with unique modes and a robust XP system for unlockables and achievements. GoldenEye 007 also supports the Classic Controller Pro for gamers who want to play with standard FPS controls and the Wii Zapper for “point and shoot” gamers; players will have several control scheme options, allowing them to experience GoldenEye 007 on Wii any way they want.