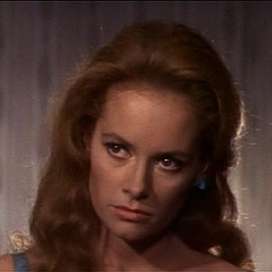 Luciana Paluzzi is an Italian actress who is perhaps best known for her role as Fiona Volpe in the James Bond movie Thunderball (1965).

Luciana Paluzzi is an Italian actress who started her career in the mid 1950s. In 1959 she appeared in Five Fingers, a spy themed NBC show. In 1964 she played the villainess Angela in the pilot of The Man from U.N.C.L.E, another spy themed show with contributions from James Bond author Ian Fleming. Throughout her acting career, she has starred in almost 80 films and TV shows, most of which are Italian. She is most known for her spectacular performance as Fiona Volpe in Thunderball (1965). Luciana enjoyed playing Fiona Volpe, and thought it was fun to play the bad girl for a change. She currently lives with her husband Michael Solomon, in Bel Air, California.