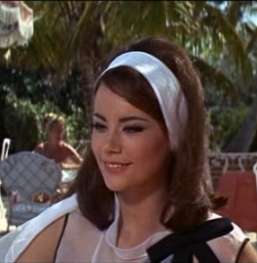 Claudine Auger is a French actress best known to James Bond fans for her role as Dominique Derval in the 007 film Thunderball (1965). Her role as Domino accelerated her European career, and she went on to star in almost 80 roles.

Claudine Auger is a French actress who started her career in the early 1960s. At the age of 15 she became 1958's Miss France. She attended the St. Joan of Arc College and the Paris Drama Conservatory, and got an uncredited film role while still studying. On the set, she met the film's writer and director, 41 year old Pierre Gaspard-Huit. They married two years later, and Pierre's influence helped to propel Claudine's European career.

By the time she got her role in Thunderball in 1965, she had starred in over ten films, which were mostly lower budget French productions. She was vacationing in Nassau at the time, and co-producer Kevin McClory had spotted her and suggested that she audition for Domino. The role as Domino Derval greatly accelerated her European career. She went on to star in many films and TV shows, mostly in French, Italian and Spanish.