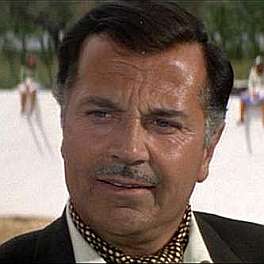 Gabriele Ferzetti is a famous Italian actor who's best known in the James Bond community for his role as Marc-Ange Draco in On Her Majesty's Secret Service.

Gabriele Ferzetti is a successful Italian actor who started his career in 1942, playing a minor character in an Italian film. He had previously attended the Accademia d'Arte Drammatica school in Rome, Italy, but was expelled after accepting a screen test for his first film. Throughout his life he has starred in over 150 films and TV shows, including Once Upon a Time in the West and one of his latest roles in the 2005 show Pope John Paul II. Although he is famous in Italy for many of his films, the rest of the world knows him best for his role as Marc-Ange Draco in 1969's James Bond movie On Her Majesty's Secret Service.

From the Italian National Syndicate of Film Journalists: