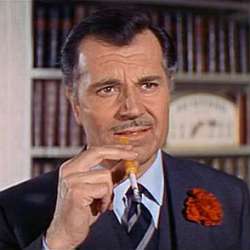 Marc-Ange Draco (played by Gabriele Ferzetti) is the head of the Union Corse, a large crime organization that operates mainly in France. He is also the father of James Bond's wife, Teresa Di Vicenzo.

In the 1969 James Bond movie On Her Majesty's Secret Service, Marc-Ange Draco was the head of the largest criminal organization in Europe. He was a very powerful man, yet charming and kind to his friends. He ordered his men to bring Bond to him, after he heard of how well Bond had treated his daughter, Teresa Di Vicenzo (Tracy). He then asked Bond to love and marry Tracy, as she was unhappy and suicidal, and bribed him with information on the location of Blofeld as well as one million pounds.

Later on in the movie after his daughter had been kidnapped, Draco went to Piz Gloria with Bond and his men, in helicopters. On the way there, he cleverly convinced Zurich Information that he was with the Red Cross, carrying blood plasma and emergency equipment to Italy. The Military Air Control would not allow them to pass through the area and they sent out fighter jets to stop them, but they left when Draco told them he was carrying distinguished members of the world Press.

In Ian Fleming's book On Her Majesty's Secret Service (1963), Marc-Ange Draco was the head of the Union Corse, a large crime organization that operated in Europe, mainly in France. His daughter, Tracy, was highly depressed and suicidal, so he brought in James Bond and asked him to marry her. He offered him information on Blofeld's whereabouts, as well as a large sum of money, to be given out on the day of the wedding. Near the end of the book, when on the way to attack Piz Gloria, Draco pretended to be with the Federal Police Alpine Patrol, so that the men would be unprepared for his attack.