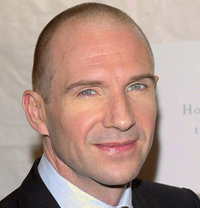 In an interview earlier today with the Daily Record, Ralph Fiennes talked about his love of the James Bond novels, admitting that he "used to be a complete nerd about the books and the detail in them. They are fantastic. There was Fleming's obsession with different kinds of champagne and caviar. He kind of fetishises these things."

Ralph will be playing an unknown character in the upcoming Bond 23 film, Skyfall, released next October. As is expected, he wouldn't reveal much about the character, but he did add that "I'm allowed to say that I'm a government agent." Is he misleading us, or will the Blofeld rumors prove to be wrong?

When interviewer John Millar suggested that he would make an ideal Bond, based on the character in the books, Ralph smiled, and replied "There was a time in my life when that would have appealed to me. But I'm a bit on the old side now."

"I have grown up loving Shakespeare. But even when I see a Shakespeare play that I don't know, there is always that momentary thing when your ear adjusts. For me, it is always like a wonderful,enjoyable puzzle."

There's a lot more in the full interview for Ralph Fiennes fans, so be sure to give it a read.