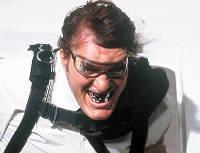 In a recent HMV Poll for the best James Bond Character, nearly 30% of the 4,900 respondents went for Jaws (nicknamed due to his strong, stainless steel teeth that could bite through virtually anything, and which he would use to lethal effect on his opponents by biting through their jugular.

"We all have our favourite Bond characters, but you can see why so many of us go for Jaws," said HMV spokesman Gennaro Castaldo.

"Aside from his incredible physical presence, he's got a great name and gimmick, and his stainless steel teeth are so wonderfully villainous.

"Ultimately, however, I think we like him because in the end he turns good-guy."

The next favourite character was Q, who gained 16 per cent of the popular vote. The fictitious Head of Research & Development for British Intelligence, who had little time for Bond's charms, was most famously portrayed by Desmond Llewellyn and, in more recent films, by John Cleese.

The bowler-hatted villain from Goldfinger, Odd Job, came next in the poll, with 11 per cent, ahead of M - the secret service chief played by Bernard Lee in numerous Bond films and since 1995 by Dame Judi Dench, who received 9 per cent of the votes cast.

Making up the top five was Miss Moneypenny - the faithful PA to M in all the films, played definitively by Lois Maxwell and more recently by Samantha Bond.

Here's a quick summary of the top 5: