In the comfort of his lavish Rumpus Room, Goldfinger tells the Mob bosses about his plans to knock off Fort Knox, only to kill them right afterwards. This ridiculous idea gave the producers an opportunity to explain the plot details. To keep the audience's attention, the room was filled with ingenious gadgets, that added some fun to Goldfinger's bold speech. 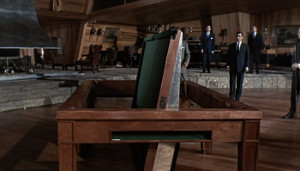 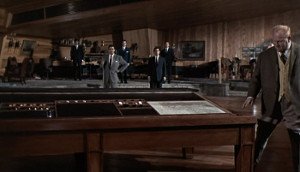 Goldfinger owes each of the mobsters one million dollars. He opens his speech by telling them that they can have their million that day, or $10 million the next day. Goldfinger strolls around his pool table, rolling some of the balls into the pockets. He then reaches for a switch at the side of the table, and the whole mid-section flips over and swizzles round to reveal a control panel.

Goldfinger uses this control panel to control the rest of the gadgets in the room, to the bedazzlement of the mobsters, who are at first very wary. 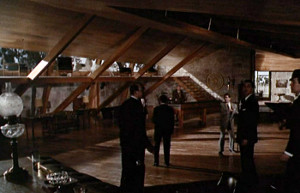 The first switch Goldfinger presses activates the canopy above the large windows, that fold down to block out all of the light. This is in fact a sly trick, as it's the first step in sealing the room, so that the mobsters can later be gassed. It also served to create a more intense atmosphere for Goldfinger's speech. 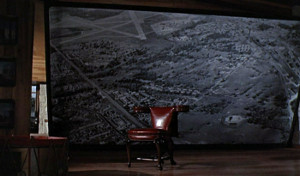 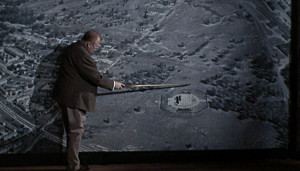 Goldfinger activates another switch, and a large section of the floor hinges upwards and folds against the wall, to reveal a large canvas. The canvas contains a very large blow up aerial photograph of the Fort Knox gold depository. The bookshelves at either side of the map slide inwards to block off the entire wall. This is yet another trick to gradually seal in the room.

Goldfinger proceeds to explain to the mobsters that the vaults of the Fort Knox contain $1 billion, the entire gold supply of the United States. 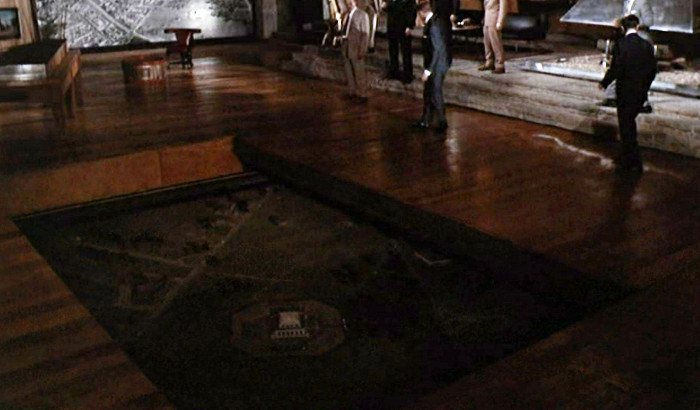 Man has climbed Mount Everest, gone to the bottom of the ocean. He's fired rockets at the Moon, split the atom, achieved miracles in every field of human endeavour... except crime!

A section of the floor slides open to reveal a scale model of the surrounding areas of Fort Knox. 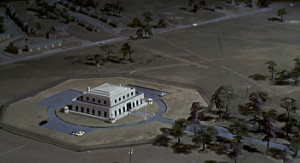 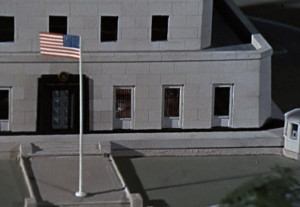 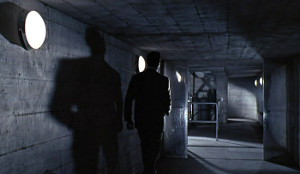 While Goldfinger is entertaining the mobsters, Bond is locked in a cell in the basement. He plays a mind trick on his guard, who unlocks the door to see what's going on. Bond climbs up to the rafters and jumps on the guard as he comes into the cell, knocking him out.

Bond then walks down a concrete walled corridor, and stumbles into the lab below Goldfinger's rumpus room. He climbs onto the hydraulic device that rises the Fort Knox model, and eavesdrops on Goldfinger's speech, peering through the slots of the model depository.

He manages to write down a summary of Goldfinger's plans, just before Pussy Galore grabs his feet, and knocks him down. After Bond is escorted out of the room, a technician comes in and puts on a gas mask, ready to seal the room above, and gas the mobsters. 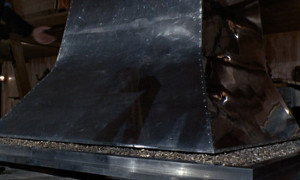 After Goldfinger outlines his plan, one of the mobsters, Mr. Solo, objects to the ridiculous scheme, and asks for his million dollar payment. Goldfinger excuses himself, and leaves the room. The technician in the lab below presses a leaver that seals off the fireplace, so that the gas will be contained in the room. 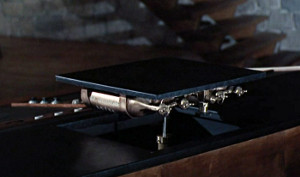 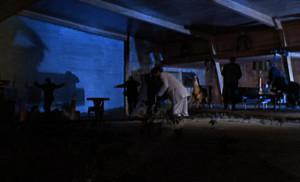 The technician turns the last fatal lever, and a compartment with three canisters of the fatal Delta Nine Nerve gas rises from one of the tables, and activates, killing all of the gangsters in the room.

Goldfinger had successfully used the mobsters, getting them to do work for him by enticing them with a million dollar contract. He had then invited them to his Kentucky home, gained their respect by divulging his plans, and then killed them.

Mr. Solo is given his $1 million in gold, and is escorted to the airport by Goldfinger's henchman Oddjob. Oddjob shoots Mr. Solo, and then compresses the car into a small cube.