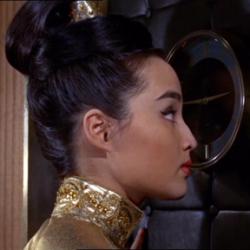 One of Goldfinger's planes used to transport James Bond to Kentucky. The plane is filled with several spying devices, all of which Bond counteracts. Gadgets include a trick mirror, spying portals and hidden compartments in Bond's razor and the heel of his shoe.

After Bond had persuaded Goldfinger to keep him alive, he was transported to Kentucky aboard one of Goldfinger's private jets. The Lockheed JetStar business class aircraft that Bond flew in had been modified for surveillance of prisoners. A buzzer was set up in the cockpit, to alert the pilot when the bathroom at the back of the plane was in use.

Discretely fitted within the bathroom were two hidden spy-hole sized windows that allowed the hostess to keep an eye on the occupant. This is just one example of Goldfinger's extreme caution in handling Bond. Having seen the gadget laden Aston Martin, Goldfinger rightfully had his suspicions, knowing that even the most in-depth full body search may not have uncovered all the tools of a spy.

When Bond went to change into something more suitable for his arrival in Kentucky, he noticed a glimmer out of the corner of his eyes. He realized that the hostess, Mai-Lei, was spying on him, and hung his suit on the back of the door to obscure her view. Upon going to shave, he noticed a two-way mirror on the wall, and promptly shielded it with his suitcase.

When Bond was sure that he had defeated all of Mai-Lei's observation tricks, he pulled out his razor and twisted off a cap at the bottom to reveal a mini 'Homer' tracking device given to him by Q. He activated the device and slid it into a compartment hidden in the heel of his shoe, so that the CIA would be able to locate him.