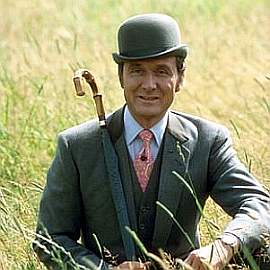 Patrick Macnee is a British actor who is best known for his roles as John Steed in The Avengers and as Sir Godfrey Tibbett in the James Bond movie A View to a Kill. Throughout his career, Patrick has starred in over 130 movies and TV shows and he is still acting after over sixty years.

Patrick Macnee is a British actor who was born in London, England in 1922. He is best known for his roles as John Steed in The Avengers and Sir Godfrey Tibbett in A View to a Kill. Patrick was educated at Eton College, but was unfortunately expelled for being "the leading bookie and pornographer on campus". However, he had gained an interest in Drama and later attended the Webber Douglas Academy of Dramatic Art.

In 1941, Patrick got a small role in a play and was later an extra in The Life and Death of Colonel Blimp (1943). After a four year period in the Royal Navy between 1942 and '46, he went back into movies and also played parts in many TV plays and episodes including Wuthering Heights (1948) and Othello (1953).

In 1960, Patrick was offered the leading role in the TV show The Avengers, where he played the Secret Agent John Steed for 125 episodes broadcast between 1961 to 1969. Patrick had several female crime-fighting partners in the show, including the leading Bond girls Honor Blackman (Pussy Galore in Goldfinger) and Diana Rigg (Teresa di Vicenzo in On Her Majesty's Secret Service).

Patrick returned to the role of John Steed in 1977, starring in 26 episodes of The New Avengers, the sequel to The Avengers. The show had a similar format, although instead of his usual female partner, he had two partners Mike Gambit, a top agent and skilled marksman and Purdey, a girl trained in martial arts.

Life after The Avengers

After The avengers, Patrick went on to star in many TV shows and films. These included the TV special Sherlock Holmes in New York (1976) where he played Doctor Watson alongside Roger Moore as Sherlock Holmes. Patrick met up with Roger a few times later, including in the film The Sea Wolves (1980) and of course in A View to a Kill playing Sir Godfrey Tibbett, a horse expert helping out Bond, and posing as his chauffeur.

Throughout his career, Patrick Macnee has starred in over 130 movies and tv shows and he is still acting after over sixty years. Some of his most recent appearances include his guest appearance as Cecil Hedly in Frasier (in 2001) and Dr. Ballard in The Low Budget Time Machine (2003). Patrick currently resides in Southern California with his wife Baba and their two dogs.