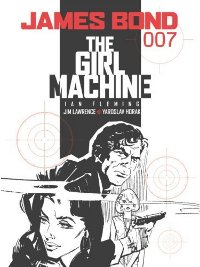 The Girl Machine comic book collection that we announced a few months ago, has now been delayed until July 21st, 2009, a month past it's originally planned release date. We're not sure why it's delayed yet, but I suspect it may be for quality reasons, since it hasn't been published since it's original syndication, it can be hard to track down good quality archives to scan.

The cover art is reportedly not final, although it is consistent with the other volumes, so it is likely to remain as it is.