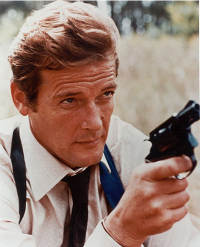 I came across a rather bizarre but nevertheless interesting article today on Roger Moore, all about the many health problems he has gone through in the past. The article was published in the daily mail a few weeks ago, but can be found online at Roger Moore's Official Site.

The article obviously has a somewhat sad tone, but with all the quotes littered throughout, Roger Moore's great sense of humour lifts it up. An interesting read, and definitely quite different from the usual.

However, the action hero and death defying-007 could not be more at odds with Sir Roger who, unlike most men, is refreshingly candid about his health - or lack of it - and even thanks some 18 doctors - 'just half of the number who have kept me going' - in his autobiography. 'I was going to call it Out Of The Bedpan,' he joshes.

Illness, he admits, has permeated every part of his life, although it is hard to distinguish whether the hypochondria that 'flows through my veins' started before the string of scrapes and near-death experiences that have punctuated his life.

'I believe it is better to be prepared for illness than to wait for a cure,' he declares, 'and you certainly save on hospital beds that way.'

He catalogues the ailments and operations he suffered as an only child growing up in Stockwell, South London, which must have terrified his parents Lily and George, a policeman.