Roger Moore to read his autobiography on Radio 2 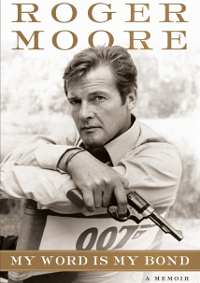 Roger Moore has recently released his autobiography, My Word is My Bond, and is going to be reading it live on BBC Radio 2, starting Friday, 24th April.

The event is supposed to tie in with the upcoming paperback release. Unfortunately it will be in 15 minute sections, over 6 weeks. Luckily though, each segment will be accessible online the day after it airs, at Radio 2 Online.

I haven't read Roger's autobiography yet. I've read an earlier biography that was written by Gareth Owen, who also co-wrote My Word is My Bond, but there's no substitute for the Roger himself. It should be really interesting to listen to his readings online.

Stay tuned to 007James, we'll post an update when the first segment airs.

The product description follows for those not aware of his book.

One of the most recognizable big-screen stars of the past half-century, Sir Roger Moore played the role of James Bond longer than any other actor. Beginning with the classic Live and Let Die, running through Moonraker and A View to a Kill, Moore brought his finely honed wit and wry charm to one of Hollywood's most beloved and long-lasting characters. Still, James Bond was only one in a lifetime of roles stretching back to Hollywood's studio era, and encompassing stardom in theater and television on both sides of the Atlantic. From The Saint to Maverick, Warner Brothers to MGM, Hollywood to London to extreme locations the world over, Roger Moore's story is one of the last of the classic Hollywood lives as yet untold.

Until now. From the dying days of the studio system and the birth of television, to the quips of Noël Coward and David Niven, to the bedroom scenes and outtakes from the Bond movies, Moore has seen and heard it all. Nothing is left out--especially the naughty bits. The "special effects" by which James Bond unzipped a dress with a magnet; the spectacular risks in The Spy Who Loved Me's opening scene; and Moore's preparation for facing down villains (he would imagine they all have halitosis): the stories in My Word is My Bond are priceless.

Throughout his career, Moore hobnobbed with the glamorous and powerful, counting Elizabeth Taylor, Jane Seymour, and Cary Grant among his contemporaries and friends. Included are stories of a foul-mouthed Milton Berle, a surly Richard Burton, and a kindhearted Richard Kiel, infamous as Bond enemy Jaws.

As much as it is Moore's own exceptional story, My Word is My Bond is a treasure trove of Hollywood history.