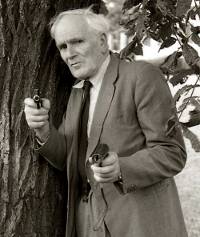 Britain's domestic spy agency MI5 is hunting for its very own Q, a gadget master for their own use. MI6's sister organization, which carries out surveillance on terror suspects inside Britain and gives security advice to the government, is searching for someone to lead its scientific work. Projects could include everything from developing counterterrorism technology to tackling a biological or chemical attack.

"Looking for a chief scientific adviser to lead and coordinate the scientific work of the security service so that the service continues to be supported by excellent science and technology advice," MI5's Web site ad reads.

Security officials refuse to discuss what techniques MI5 uses, for fear of compromising their methods. But officers have been rumored to have other James Bond-style kits at their disposal, including chemicals which can be attached to a suspect and leave a trace wherever they go -- similar to the radioactive lint supplied by Q to 007.

Good read for those interested in the non-fiction side of espionage. Read the rest at Yahoo News (found through Slashdot).