Goldfinger to Return to the Silver Screen 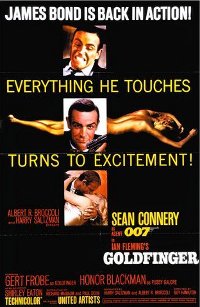 Those living in or travelling to Georgia, USA this March will be able to relive several cinema classics on the big screen, including Goldfinger from 1964, and Hitchcock's Rear Window from 1954.

The fifth annual Robert Osborne Film Festival will be held at The Classic Center in downtown Athens, Georgia, USA, on March 19th-22nd. The theatre holds 2000 people and will use archived original prints on loan from several major studios. Admission will be $60 for the entire festival, or $10 for a single viewing, with the exception of Rear Window which will be free entry.

The festival founder Robert Osborne is the prime time host of Turner Classic Movies and is a columnist for The Hollywood Reporter. "It's an exciting adventure to see these films the way they were meant to be seen," explained Osbourne. "The big screen gives a different dimension and vitality to them."

The best James Bond movie, one of Hitchcock's finest works, and the original King Kong are certainly not something to be missed if you live in the area. Check out the Festival Website, or the Classic Center site to buy tickets.