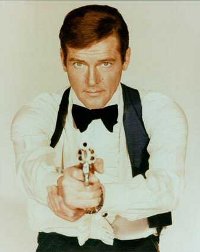 Earlier this month, Sir Roger Moore published an article in The Times, discussing his history and experiences at Pinewood Studios, the home of the James Bond productions since their beginnings in the early 1960's.

Roger talks about his first visit in the winter of 1947, including a bit of history about the studio. He then goes on to tell several interesting tales of his time there shooting among other things, The Persuaders, and of course, James Bond.

At 81, Roger is now the studios second oldest resident, behind 94 year old Peter Rogers, producer of the Carry On films. Roger has been at Pinewood through his 7 Bond movies, and two separate explosions that destroyed the original 007 Stage.

You can read the original article online at Roger Moore's Official Site.

One of Roger's memories of Pinewood:

Then there was the director Michael Winner, making his first film at Pinewood. He used to direct by barking orders through a megaphone. His cameraman became fed up with this and retreated for a lengthy toilet break between set-ups. A furious Winner went in search of him, shouting at a closed cubicle door: 'Are you in there?'

'Then get your arse back on my set now.'

'Michael. Please. I can only deal with one shit at a time.'