Double or Die out in Paperback 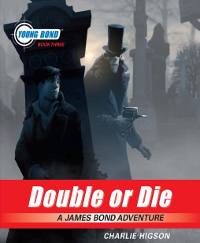 Charlie Higson's third Young Bond adventure, Double or Die has been released today in paperback in the US and Canada. It is also joined by reissues of the first two Young Bond novels, Silverfin and Blood Fever, all three having cover art with a villain stalking Bond, designed by Kev Walker.

The Young Bond series follows Bond through his early teenage years, as he attends school at Eton College. There are five novels in the series, which are set in the 1930s. The series has now ended, but there are rumors of a second series, perhaps following a later strand of James Bond's childhood.