3 Days of Shooting on the Skyfall Set 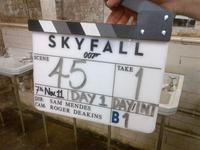 Released via the official 007 twitter feed, the following images show the start of shooting on several Skyfall sets, a different set for each day. The first, bottom right, was taken at 8.45am on November 7th: "'Action!' was called for the first time on the 23rd James Bond movie, Skyfall. We are officially go!". The scene seems to be set in a dirty bathroom, perhaps reminiscent of the opening sequence in Casino Royale.

The second image, middle right, was taken during a night shoot on day 10 of filming. It features a desk in what looks to be a warehouse or industrial building. The scene will be set shortly after the bathroom scene in the timeline of the film, and the G in the '53G' scene number denotes that the scene will have many variations.

The latest image, top right, posted yesterday, reveals a neon sign with Chinese lettering in the background. While this is just a set at Pinewood Studios, Shanghai has been confirmed as a location for later filming. There are a few other things going on in the background, but it's hard to tell what they are at this time.